Last Chance for the ‘Deplorables’ 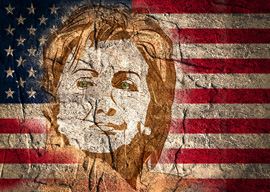 Speaking to 1,000 of the overprivileged at an LGBT fundraiser, where the chairs ponied up $250,000 each and Barbra Streisand sang, Hillary Clinton gave New York’s social liberals what they came to hear.

“You could put half of Trump’s supporters into what I call the basket of deplorables. Right?” smirked Clinton to cheers and laughter. “The racist, sexist, homophobic, xenophobic, Islamophobic, you name it.” They are “irredeemable,” but they are “not America.”

This was no verbal slip. Clinton had invited the press in to cover the LGBT gala at Cipriani Wall Street where the cheap seats went for $1,200. And she had tried out her new lines earlier on Israeli TV:

“You can take Trump supporters and put them in two baskets.” First there are “the deplorables, the racists, and the haters, and the people who … think somehow he’s going to restore an America that no longer exists. So, just eliminate them from your thinking…”

And who might be in the other basket backing Donald Trump?

In short, Trump’s support consists of one-half xenophobes, bigots and racists, and one-half losers we should pity.

And she is running on the slogan “Stronger Together.”

“No, the folks Obama and Clinton detest, disparage, and pity are the white working- and middle-class folks Richard Nixon celebrated as Middle Americans and the Silent Majority.”

Her remarks echo those of Barack Obama in 2008 to San Francisco fat cats puzzled about those strange Pennsylvanians.

They are “bitter,” said Obama, they “cling to guns or religion or antipathy to people who aren’t like them or anti-immigrant sentiment or anti-trade sentiment as a way to explain their frustration.”

In short, Pennsylvania is a backwater of alienated Bible-banging gun nuts and bigots suspicious of outsiders and foreigners.

But who really are these folks our new class detests, sneers at and pities? As African-Americans are 90 percent behind Clinton, it is not black folks. Nor is it Hispanics, who are solidly in the Clinton camp.

Nor would Clinton tolerate such slurs directed at Third World immigrants who are making America better by making us more diverse than that old “America that no longer exists.”

No, the folks Obama and Clinton detest, disparage, and pity are the white working- and middle-class folks Richard Nixon celebrated as Middle Americans and the Silent Majority.

They are the folks who brought America through the Depression, won World War II, and carried us through the Cold War from Truman in 1945 to victory with Ronald Reagan in 1989.

These are the Trump supporters. They reside mostly in red states like West Virginia, Kentucky and Middle Pennsylvania, and Southern, Plains and Mountain states that have provided a disproportionate share of the soldiers, sailors, airmen and Marines who fought and died to guarantee the freedom of plutocratic LGBT lovers to laugh at and mock them at $2,400-a-plate dinners.

Yet, there is truth in what Clinton said about eliminating “from your thinking” people who believe Trump can “restore an America that no longer exists.”