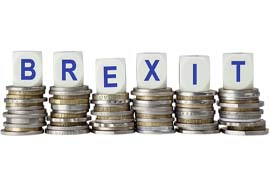 The known pros and cons of the exit issue appear to be roughly equal. For instance, the pound sterling has suffered while the FTSE remains resilient in the face of uncertainty. On the other hand, business investment dropped severely in the last quarter due to fears of Britain isolating itself from the EU’s powerful economic bloc. Again, however, six months after Britain left the exchange-rate mechanism in 1992, “U.K. equities rallied by 25% and government bonds also performed well,” Kleinwort Benson said. The wealth manager advises investors to take a long-term view of potential exits, implying that things may get pretty shaky in the short term, post-exit. Most experts estimate the U.K. will take two years to recover from this change economically.

The most frequently cited fear of Brexit regards the U.K.’s “non-dom” tax status, which allows people owning permanent property in the U.K. to pay a charge of £30,000 to £90,000 and subsequently avoid any taxes on their earnings. Departure from the EU could well hurt this group, though not fatally.

The second-most-expressed fear concerns job security, mostly within the financial sector”if exiting the free market has a dampening effect upon corporate profits. It is highly likely it would have this effect.

If U.K. companies are damaged, relocation outside Britain is a solution for high-flying financiers, currently so concentrated in London’s financial scene. A mass relocation on this order would resemble a reverse of the exodus of affluent Parisians (French taxpayers) to London prompted by FranÃ§ois Hollande’s 75% income tax, Greenhalgh points out. And what about those U.K. expatriates currently working overseas in Dubai or Russia or wherever? Or how about U.K. entrepreneurs with European businesses?

Asset manager BlackRock cautions that capital currently flowing into the U.K. will decrease post-exit, pressurizing domestic funding providers in regard to the budget deficit and “raising U.K. bank funding costs.” Fourteen thousand U.K. wealth managers look after fortunes for a large clientele outside the U.K. “If Brexit spoilt the end of “passporting” arrangements that allow U.K. companies to deal with clients living abroad, what would wealth managers need to do to ensure their clients were not lost to Geneva or Frankfurt?” asks Greenhalgh in the FT.

Larger firms would be likely to survive if authorization to do business were required from individual countries. Pan-European companies like UBS and Credit Suisse could thrive as a result, if “passporting” comes to an end. Nonetheless, commerce would become more complicated and more fragmented, raising costs and reducing competitiveness. Presently, any citizen of the EU may work anywhere in Europe at the drop of a hat”an argument against Brexit that touches on the thorn of immigration, which is another story entirely.

The U.K.’s decision to keep the sterling was vindicated long ago, though uncertainty plagued that issue at the time. In fact, Mr. Elliot, of Quintessentially Group, worked to keep the pound sterling alive, as a junior chief of the Jimmy Goldsmith-backed Referendum Party in the mid-“90s; so he knows a thing or two about economic politics. His verdict on the likely outcome of the 2016 referendum may strike one as surprising.

First, says Elliot, “the EU will always remain a whole. They [EU leaders, Germany] will never let it fragment…. As for the referendum, the campaign to stay in the EU will win. And a win for the “In” campaign may be the only way to keep Scotland from seceding from the United Kingdom,” he allows. Keeping the Kingdom intact is a prerequisite, not least for the purpose of preserving its negotiating power.

Elliot emphasizes the leverage the U.K. has in Europe, repeating that “either way, Britain is a leader in Europe. It’s the No. 2 economic contributor inside Europe…. If [only] two or three countries like Ireland could follow Britain’s lead, then it could easily make a good deal with Europe,” he concludes, strategically.

Presumably a better deal than Cameron alone achieved? And after all, it was David Cameron who promised the referendum in the first place”during his election campaign.