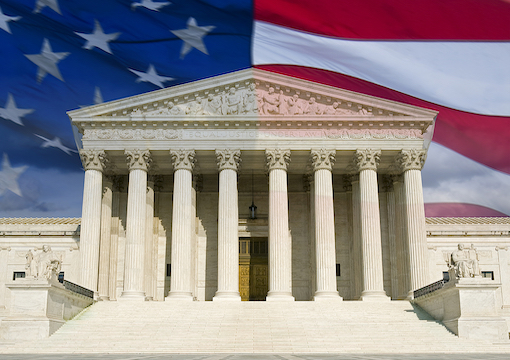 A left-wing conceit in America is the claim that the courts, especially the Supreme Court, follow the election results. Progressives have always liked this expression because it allows them to assume the court was following the will of the people when they went along with the latest left-wing legal theory. This assumption gave democratic legitimacy to unpopular left-wing rulings from the court.

In reality, the court rulings that still haunt us were made in the teeth of popular support for the status quo. Brown v. Board of Education of Topeka was decided in 1954 when the overwhelming majority of people thought separate but equal was a sensible compromise to keep peace between the races. Roe v. Wade was decided when people were turning away in disgust from the cultural revolution of the 1960s.

The truth is the courts are a lagging indicator. Brown and subsequent race cases were the legacy of the New Deal. Those judges were the product of that period. They set the world on fire by forcing through ideas that were never popular. The same is true of the cases regarding family law. These were ideas from an era that the people were hoping to condemn to the dustbin of history.

“In reality, the court rulings that still haunt us were made in the teeth of popular support for the status quo.”

We may be on the cusp of another period of legacy activism. For example, the court just heard an abortion case and has signaled they are ready to overturn Roe. The case involves a Texas law that comes close to banning abortion in the state. This should be a slam dunk for the court, but the conservative justices made it clear that they are ready to reconsider Roe. This case looks like setup for that result.

Now, thirty years ago most conservatives would have been jumping for joy at this prospect, but those conservatives are now too old to jump. The truth is, abortion was always a baby-boomer fetish, along with the whole range of crotch issues. The issue still has some resonance, but the fact is this is a win for a movement that now mostly resides in the nation’s rest homes.

Another example of legacy activism is the gun issue. The court recently heard New York State Rifle & Pistol Association Inc. v. Bruen. This case asks the court to determine if New York’s discretionary gun permit law, which requires citizens to demonstrate cause to carry a weapon, violates the Second Amendment. The court appears to be ready to build on District of Columbia v. Heller and strike down this law.

What is becoming clear with regards to guns is the conservative justices are ready to apply strict scrutiny to firearms laws. In the past, the court has applied intermediate scrutiny, requiring states to only show a compelling government interest in regulating the ownership of firearms. Strict scrutiny would invalidate almost all local gun laws in the country and largely settle the issue as a legal matter.

The case that may become the Roe v. Wade of gun control is Bianchi v. Frosh, which has just been submitted to the court. We will not know if the court takes up the case until 2022, but it seems to have been tailored for this court. The case asks the court “Whether the Constitution allows the government to prohibit law-abiding, responsible citizens from protecting themselves, their families, and their homes with a type of ‘Arms’ that are in common use for lawful purposes?”

Yet another example of judicial legacy activism is West Virginia v. Environmental Protection Agency, which was heard in the last court session. The case asks the court to determine whether a provision of the Clean Air Act authorizes the EPA to issue significant rules without any limits on what the agency can require. In other words, it challenges an old practice of Congress delegating authority to unelected bodies.

What this case does is attack a practice going back to the New Deal in which Congress hands over to the administrative state the ability to make law. This has long been an issue within conservative jurisprudence. They have held that this practice is both unconstitutional and antidemocratic. The court nibbling away at this practice would revolutionize regulatory policy in Washington.

Taken together, what we are seeing is legacy judicial activism that has its roots in elections and debates from long ago. Conservative legal theory has always held that social issues should be decided democratically at the local level. The text of the Constitution should be applied as written. The administrative state does not have the power to make law, only to enforce the laws passed by legislatures.

As a practical matter, these cases are about those issues. If the court overturns Roe, then it becomes a state issue. Massachusetts can continue its eugenic policies while Texas is free to ban such practices. The right to bear arms is no longer a topic of debate, as the Bill of Rights makes it explicit. If Congress wants to ban lawnmowers, they have to pass a law to ban them, not hand it over to the EPA.

This will all be viewed as good news in the retirement homes where the remaining conservatives reside, but judicial activism comes with a price. Corporations will no doubt begin to blackmail states that ban abortion. We see this with laws against allowing men to compete against girls in sports. The sports companies organize corporate boycotts against the states protecting their girls from cross-dressers.

In the case of guns, private entities will rush in to fill the void. The same companies demanding their employees take an experimental vaccine will demand their employees eschew gun ownership. Insurance companies will boycott gunmakers, allowing them to be sued into extinction. We see this with the NRA, which has been forced into bankruptcy by the insurance monopolies.

In other words, along with the demographic and economic winds buffeting the American empire, it is on the cusp of another judicial revolution. Unlike past legal insurrections, this one is about to devolve power to private and local actors. At a time when the people are questioning the logic of empire, the courts seem poised to strip Washington of its power to provide the answer.

Returning to that old chestnut about the courts following election results, the reality is the courts try to fix the mistakes of past election results. That is, laws that should have been considered by the election winners through the democratic process are finally enacted by the courts after those winners are long gone. Devolution should have been done by Republican legislators; instead it will be done by conservative judges.

While this legal insurrection comes with loads of risk, it also brings opportunity for normal people to reassert control over their lives. Radicalism has never sold well locally, which is why radicals seize institutional power and then use it to cripple local centers of power and authority. If the courts begin the process of returning these fights to the local level, normal people will at least have a fair chance against the radicals.