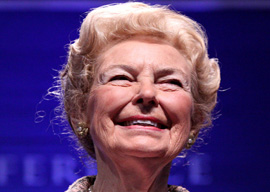 Phyllis Stewart Schlafly was the opposite. She was qualified to be a Harvard lawyer back in 1945 before the school took women. They were going to make an exception for her because she was too brilliant to pass up. Instead, Schlafly focused on activism until her ovaries ripened, then she quickly settled down to create and shape the lives of six extraordinary children in Alton, Illinois. Though she never shirked her duties as a mother, she also ran for office several times and wrote a syndicated column that was read by millions. While Dunham’s book vacillated between lying and bragging about rape, Schlafly’s A Choice Not an Echo changed America forever. In it, she argued that presidents should not be grandfathered in like Republican governor Nelson Rockefeller expected to be at the time. This permanently changed the GOP, led to Ronald Reagan’s presidency, and is a big part of why we like Trump so much”he’s no echo. Conversely, we have Lena Dunham pushing Bill Clinton’s wife because she”d like to “Netflix and chill“ with the candidate. While Schlafly pointed out long ago that it’s a myth that the GOP needs immigrant votes, Lena Dunham tweets, “You can”t speak that way about immigrants in America.” One is a silly girl and the other was an icon, but the shocking truth is that both have wielded about the same influence on American society. They”ve generated roughly the same jobs and money in the economy and quite possibly will have had the same political influence. Remember, it was bitter single women who got Obama elected and Dunham was part of that.

I apologize for marring an article about one of the greatest thinkers of our time with a silly airhead like Lena Dunham, but I”d argue it’s what Phyllis would have wanted. She didn”t just say, “Look at what I do. I”m good for America.” She also said, “Watch out for what they do. They”re bad for America.” The “pussy generation“ is bad for America and we can”t let them kill all our hard work.