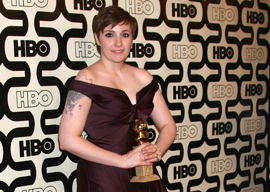 Dunham is so devoid of self-awareness that she is able to consistently plunk herself with a straight face into the fashionable role of victim. In the pilot episode, her (blithely autobiographical) character is working a glamorous but unpaid internship in NYC when her parents come for a visit. They tell her it’s time they cut off her money supply so they can finally live their own lives. Devastated, she is “reduced” to stealing the tip money they left for their hotel maid.

One would hope this was satire, but the indie guitar that chimes in as she commits the crime tells us we”re supposed to feel bad for her. Dunham recently declared, “I seriously think television to be the people’s medium,” unintentionally bringing to mind the dearly departed Rik Mayall“although, miserably, she’s right in a way; popular written fiction may be on its way out. Her solution is to fill the screen not with a reflection of the grinding cubicle horrors of “the people’s” lives, but with her struggles to be allowed to howl at her boyfriend or dump him for no good reason and not have him get angry at her. (Dunham’s character complains incessantly to female friends that her men treat her heart “like monkey meat,” but most of what she actually shows in male-female relations looks to me like the reverse; once again, this could be satire, but one suspects it’s simply warped perceptions.)

This is what makes this show feel so hollow: though New York City is awash in humanity, Girls is entirely about the ego of one young person whose friends and lovers, busily written though they may be, are cardboard props. In one episode she whispers to her mirror reflection: “You are from New York, and therefore you are just naturally interesting.”

The show is empty because it is about nothing except a self which is itself nothing, because it cannot self-examine.

This self’s only motive for looking inside is to find defenses against the outside world’s most banal criticisms. She’s not fat, she’s real! She’s not a racist”look, she added a black boyfriend to bat around in season two!

But seriously, hon, do you find anything’s wrong with your inner life? “I think I”m too smart and sensitive and too like not crazy.”

The confusing non-content of Dunham and Gould’s argument reflects what’s wrong with Dunham’s entire public entity, and what by extension is wrong with us for paying attention to it. It is confusing because of the hole at the center. It’s an onion wrapped around an ego.

If the elite scions who are paid to look down upon the human condition cannot reach beyond failed introspection, the livestock they milk for viewership can hardly expect to fare better.