Lessons From a Media Moron 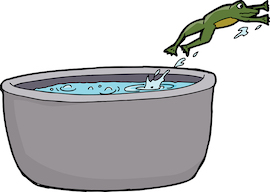 These days, it’s getting harder to tell the calculating and corrupt from the gullible and stupid. A few weeks ago, the journalistic community anally expelled a collective brick when reports surfaced that a bunch of racist Nazi child barbers at a Virginia elementary school had attacked a poor, innocent black sixth grader and cut off her beloved dreadlocks, thereby violating her Nazirite vow and robbing her of her power to twerk. The story of Black Samsonite being forcibly shaved by Sweeney Totenkopf became an international story faster than you can say “obvious hoax.”

Of course, everyone on the right who isn’t a coward when it comes to race pegged the hair-razing tale for what it was—another phony hate crime. And you know what? It was such an obvious fake, I’m fairly certain a good many journalists and editors who reported on the non-incident kinda knew. Oh, I’m sure there were a few true believers in the newsrooms, but I’d wager that the majority of paid journalists who greenlit the “Emmett Till is dread” story had suspicions. But they knew the game, and the rules of the game are that more people will read the fake accusation as it’s shoved down the public’s throat for three straight days than will read the tiny correction that’ll run in the comics section right under Family Circus, or online way at the bottom of the page below the ad for the miracle age-reversal cream.

So, bottom line, run yet another white oppressor/black victim hate hoax, and even when the truth comes out, maybe 60% or more of the people who read the initial story won’t see the denouement. Plus, in the years to come, the lie will remain alive, archived via “trusted news sources,” while sites that reported the truth will be banned (or demoted) from Google search results.

There’s no downside to running a fake, agenda-driven story, if you’re smart. But if you’re dumb, you’ll end up looking like Elise Solé.

Who’s Elise Solé? Elise Solé is a force of bad nature, a nonstop social justice story-producing monster at Yahoo News. She’s the John Henry of racial outrage stories, a shitpile-drivin’ machine who never met a “racist AmeriKKKa” story too trivial for her mighty typin’ fingers. I’ve tussled with her before, once over her inclusion of a blatantly anti-Asian video in an “Asians oppress blacks” news piece, and, more recently, for omitting key information from one of her trademark “magnified trifle” outrage articles, in which a fat black woman screamed genocide when her white seatmate on an American Airlines flight had the gall to cross her legs and flip her hair. Solé left out two rather important details: Negra grande had a history of false rape accusations, and she described herself on Instagram as a “petty black extremist.” Following my critique, Solé did what any cowardly hack would do: She blocked me on Twitter and made her tweets “protected.”

Solé really went the extra mile for the Virginia haircutting hoax, wringing 1,000 words from a baseless allegation made by a child. She interviewed a nutcase clinical psychologist who blamed the entire thing on “whiteness,” and she brought up unrelated incidents involving a New Jersey high school wrestler, a 4-year-old Texas tranny, and a medical study that proves black people feel pain (Solé even interviewed a kitchen sink for good measure).

Solé assured her readers that the overkill was necessary because “the alleged attack is involves the intersection of race, gender, and religion.” And as that disjointed sentence indicates, Solé is an excrementally bad scribe. The site Terribly Write, which is dedicated to exposing and ridiculing the internet’s worst writers, has an entire page devoted to Solé’s spelling, grammatical, and unclassifiable errors (she literally invents ways to write poorly).

About two weeks ago, Elise Solé made a mistake for the ages, notable not so much for the harm it did—it was really more funny than destructive—but for what it portends for our future.

In a Sept. 17 piece, Solé reported that a Wells Fargo bank in Santa Monica had been robbed by an armed man wearing a Mexican “Day of the Dead” mask. Solé stated that the authorities were going to criminally charge the robber for wearing a “culturally appropriated” mask. The thief “may be charged with cultural appropriation in addition to bank robbery,” Solé wrote, quoting the Santa Monica PD: “Use of a Day of the Dead Mask during a robbery can be a separate offense or an enhancement, under the California Penal Code. In this case, the suspect is sought for violating the rights of indigenous peoples, and for bank robbery.”

Yes, a California bank robber was criminally charged for wearing a “racist” mask. Except, no. The borderline retarded Solé fell for a piece from the Santa Monica Observer—a satire site. The story was a joke. There was indeed a Wells Fargo robbery, the armed thief did indeed wear a Day of the Dead mask, and the Observer, in an obvious attempt to mock California PC culture, posted a satirical story in which authorities decided that the “cultural appropriation” was a bigger crime than the armed robbery. Not only did Solé idiotically read the story as true, she (once again) went the extra mile and included some outright plagiarism. The Observer piece featured a completely made-up quote from Wells Fargo regarding the robbery: “Wells Fargo Bank does not tolerate racism, cultural appropriation or discrimination of any kind.” Solé took that fake quote and incorporated it into a quote she claimed to have personally received from a Wells Fargo spokesperson (which isn’t possible, as the quote was a fabrication by the Observer).

Okay, I’ve made my point about Elise Solé. Corrupt, stupid, illiterate, and a plagiarist (Yahoo News repeatedly refused comment regarding that last part, which one would think should matter even if the first three don’t). But this piece isn’t solely about Solé. Raise your hands, those of you who for a moment thought the “charged with cultural appropriation for wearing a mask” story was genuine. I’ll bet at least half of you were thinking, “Oh, that nutty Commiefornia.” Steven Crowder’s editor-at-large Courtney Kirchoff was certainly thinking that; she read Solé’s piece with zero skepticism, taking it completely seriously. “This is real. This is sad,” she wrote on Crowder’s site. “If you think this kind of crazy is limited to California, don’t be so sure.”

A good two dozen other conservative sites, and at least a dozen leftist sites, also linked to Solé’s piece as a real news story.

So what does that tell us? The easy answer, the one you’d get from a site like The Blaze, is “Leftists have gone so batty you can’t tell fact from fiction anymore!” That’s not untrue, but it doesn’t go far enough.

Remember that old saw about how if you put a frog in boiling water it’ll jump right out, but if you put it in tepid water and gradually turn up the heat, it’ll just sit there and boil to death? It’s a bullshit parable; the frog’ll jump out the moment the water gets too hot. But the point of the phony fable, that when something bad occurs slowly and incrementally we can fail to notice until it’s too late, has merit.

If the Elise Solé episode teaches us anything, it’s that we’re being frogboiled.

The complete domination of social media, and our complete immersion in it, has conditioned us to accept two concepts: Speech can be banned, and viewpoint discrimination is something that must be accepted. Because online, yes, both of those things are true. Any platform and CDN can ban speech at will, and any platform and CDN can treat users differently based on their political and ideological views. This is online reality, and it’s totally legal. We bitch about it, we speculate about ways to change it, but in the end, we’re forced to accept it, because we have no choice. “Ah, nuts, I got banned from Twitter and Facebook for political content. It sucks, but hey—you can’t fight it. It’s just how things are.”

My theory—and this is only a theory—is that since social media took over our lives we’ve gotten so used to saying “You can’t fight speech bans and viewpoint discrimination,” we’re starting to accept that premise in the non-online world. Our speech-related activities have become tethered to social media, where the First Amendment doesn’t apply. Inside our online terrarium, we’ve grown accustomed to living with things—speech restrictions and viewpoint discrimination—that we don’t have to live with on the outside. But that damn terrarium has become so all-important and all-encompassing, we’re losing sight of the fact that the rules on the outside are different, and we’re losing our resolve to fight for the rights we have.

Because no, New York City can’t criminally penalize you for saying “illegal alien.” No, police departments and courts are not allowed to treat people differently based on political viewpoint. No, the cities of Portland and Seattle and Berkeley do not have the right to favor one group of protesters and disfavor another because of their political views. Government entities cannot ban speech or engage in viewpoint discrimination. And if they do, we have every right to object.

But all that time we spend online is messing with our minds. We’re starting to confuse virtual rules for real-world rules. No one should have fallen for the Day of the Dead “cultural appropriation mask” story, but the fact that even a bunch of conservatives were like, “Oh well, that’s just the way things are; it sucks but it’s legal,” is troubling. The state cannot put you in jail for wearing a culturally insensitive mask; that should have been obvious. Yes, for all intents and purposes, “racist” masks might as well be banned. This time every year we get lectured nonstop about what not to wear. Wear a forbidden Halloween mask, and the Twitter mob will destroy you. But “Twitter forbidden” and forbidden forbidden (as in, by law) are not the same thing. And if we lose awareness of that distinction, we’re screwed.

We’re losing the healthy, automatic, knee-jerk reaction of saying “Wait, they can’t do that,” because we’re spending too much time in a virtual world where “they” totally can.

When it comes to speech, social media is essentially Canada and Europe—“bad speech” is banned and bad speakers punished. Get enough Americans used to living in a virtual country that has no First Amendment, we might start to forget that we live in a very real one that does.

In a case of completely inadvertent good journalism, Elise Solé exposed something very alarming about America and free speech: We’re letting our guard down and lowering our fists at a time when we should be itching for a good fight.