Life, Liberty, and the Pursuit of Bananas 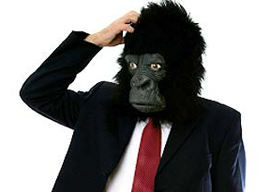 Ostensibly, Spanish parliamentarians acted not only illogically but insanely. But the real animus behind their resolution was in no way constructive: They don’t care about animal rights, nor for that matter human rights. Their true purpose is the same as everywhere in the West these days: destruction of Western spiritual and intellectual tradition. And man’s unique status has been essential to that tradition ever since Genesis 1:28. So it has to go.

Chimpanzees do look remotely similar to humans. And the appearance isn’t necessarily deceptive: Humans and chimps share 99 percent of their active genetic material. Although all decent people deplore unnecessary cruelty to animals, this makes medical experiments on apes so necessary: By responding to drugs like humans and unlike other animals, apes save human lives. Though no such experiments are conducted in Spain, the legislators banned them just in case. Yet the persistent physical likeness between apes and humans creates problems for their ilk.

Biology cannot explain why, given such close proximity, apes still look rather different from humans, even those as flawed as Richard Dawkins. Anything near the same biochemical closeness produces virtual twins in other animals: Even though they are several times further apart from each other than humans are from apes, some species of squirrels are practically indistinguishable.

In other species such genetic proximity presupposes the possibility of mating so dear to Singer’s heart. We know of numerous examples of interbreeding not only among different species within one genus, but even among different genera, where the genetic distances are vastly greater than those between humans and chimpanzees. And yet these putative twins cannot produce common progeny, for all the highly publicized scoops in the press some years ago. A mating experiment is underway, we were told, and soon a “Pithecanthropus” will be produced, proving that Darwin was right all along. The experiment failed—so do they acknowledge Darwin was wrong all along?

Other failing experiments set out to prove that apes’ intelligence, allegedly so much superior to other animals’, if ever so slightly inferior to man’s. Yet reluctantly the conclusion is that primates don’t differ from other mammals as much as primatologists believed in the past. In fact, many scientists place chimpanzees lower on the intelligence scale than other animals such as dolphins and elephants.

Much has been made of the apes’ ability to use a few primitive tools. Yet apes aren’t the only nonhumans who can do so. The Galapagos woodpecker (Cactospiza pallida) grips a cactus thorn in its beak to pluck insects out of the tree bark. Some birds of prey attack ostrich nests by dropping stones from a great height. Eagles drop turtles onto stones to break the shells.

There are many other illustrations of some animals being equal, and often superior, to primates. Apes do not bury their dead; wild dogs and elephants do. Female apes are known to keep carrying around their dead infants until they start to decay. And as opposed to whales, who treat old whales kindly, apes will often attack their elders. Still, the primatologist Jane Goodall writes: “It is wrong to draw direct parallels between the behavior of apes and humans.”

Here I must respectfully disagree. Human beings attack their elders as well.

This may point at what the ape really is. If man is Dorian Grey, the ape is the ghastly portrait in his attic, there to remind us how we’ll act and look if we divest ourselves of our humanity. The ape isn’t our past; it’s our future.