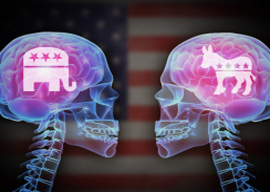 It’s challenging to talk to the animals because you have to act like Dr. Doolittle with almost every topic. If you want to discuss the female/male wage gap don”t say something brash like, “Women earn more because they choose to.” Start slow and say how perplexed you are by women who abandon successful careers to stay at home with the children. “It must be frustrating for the feminists who helped pave the way,” you say despondently. “However, a woman’s choice is a woman’s choice, so if she wants to stay at home that’s her prerogative, no matter what it does to the wage-gap statistics.”

“Speaking of choice, isn”t it awful what’s been going on with people aborting babies because they”re female? No, not just in China”in Austin and all over the country. I bet this silent “War on Women” isn”t getting reported because of sexism. Yeah, apparently Planned Parenthood doesn”t hesitate to help people abort babies based on gender and as we”ve seen in China, this process tends to favor the male. These disgusting white men want to further their despicable lineage and keep all their stolen money in the family, so they”ve created a patriarchy where abortions become female genocide.” (See what I did there? I almost got a liberal to admit abortion is sexist AND murderous.)

The secret to living among the savages is to understand how their brains work. To them, the ends justify the means, so when Holder and Obama wanted people to hate guns, they worked backward from there. Guns weren”t doing a good enough job smearing themselves, so the White House gave assault rifles to Mexican criminals and said, “Shoot.”

To get a liberal to think logically, you have to do the same thing. Never say, “Drill, baby, drill.” It sounds like you”re saying, “I don”t care what happens to the environment. I want money.” You have to start at the end with “War is bad.” Then you talk about all the young men giving their lives for some stupid oil war. “It’s unconscionable. You don”t see the politicians or rich white CEOs sending their kids to Afghanistan. It’s always the blue-collar family in rural America having to go because there are no other jobs. In upstate NY and Pennsylvania there could be hundreds of jobs drilling for natural gas, but the bureaucrats (don”t say “eco-environmentalists”) have crippled the whole industry there.” The liberal might come back with, “But isn”t that kind of drilling dangerous? Doesn”t it pollute the water supply?” As gently as you can, respond with, “My understanding is we get about 90% of our natural gas the same way, and isn”t sending kids off to war far more dangerous?” Act as though you”re working through this together and even though the person you”re talking to has a degree in bullshit and lets the TV do all their research, you need to pretend you know as little as they do.

Treading softly through the jungle gets tiresome and occasionally you run into a Dr. Livingstone who has actually done his research. Dealing with so many morons is what makes talking to the sane so cathartic. Finally, you can pull up a stool, grab a beer, and speak freely about freedom. “Can you believe this ideologue of a president?” you blurt out recklessly. “Why didn”t he do what Pinochet did and just dump the bodies in the ocean? I guess Holder needed the photos. They pretend they”re out to help the little guy, but it’s really a giant war on the poor. Cheap labor from Mexico, denying drilling jobs so the blue-collar kids have to fight their wars”what a bunch of elitist assholes. They”re right about one thing. There is a war on women. Its weapons are feminism and abortion. Feminism insists women generate tax revenue while raising children, and abortion kills female children in the womb. It’s all part of the same big mess. Instead of giving people the freedom to pursue happiness on their own, the liberals decide what’s best for everyone and force us to acquiesce.”

There’s something very satisfying about speaking truth to liberals, especially when they”re in power.