Losing Our Heads Over Full-Body Transplants 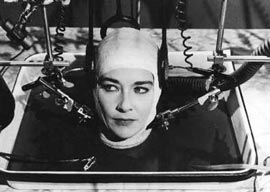 The Brain That Wouldn't Die

(To that end, Spacek’s voice work in Martin’s movie, while sensitively done, can”t compare with Adele Lamont’s sublime performance in TBTWD: Stuck in a tray full of goo, reduced (in the sense of “powerfully concentrated” rather than “diminished) to a gorgeous disembodied head and indelible voice, Lamont’s out-acts any number of film history’s leading ladies. She should have won an Oscar—or just the very top bit, perhaps?)

And that’s all head transplants have been “ the stuff of semi-thoughtful science-fiction chatter “ until last week.

Sergio Canavero of the Turin Advanced Neuromodulation Group made headlines all over the world by boasting that “he could accomplish the feat by 2017.”

He’s bullshitting, obviously. Judging by the Italians I grew up with, when God was handing out brains, they were all hiding behind the dusty vertical blinds at the shabby storefront men’s club.

Just how fatally Italian is this dude? Actual quote: “Why did the US and the Soviet Union just vie for being the first to space? Because it is about measuring dicks.” Italians have approximately two hundred and sixty seven words for “penis” because they believe that is the seat of intelligence.

So calm down, reporters and pundits: You won”t have to finally (pretend to) read Frankenstein after all. Smarter people than you have spoken: “Canavero’s plan is insane.”

Why not go out on a limb and cover a real story instead, like how workers” comp for amputations is only “worth an arm and a leg” if you happen to live in a particular American state. (Helpful hint from Fast Company? “Whatever you do, don”t move to Alabama.”)

Not that I really minded watching journalists lose their minds over the “full-body transplant” nonsense. It was a pleasant break from hearing about all the other guys halfway around the world (for now, at least), preoccupied with permanently removing heads instead.