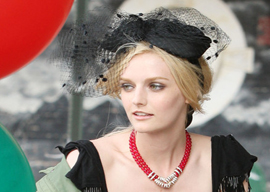 Sometimes love needs no explanation. And then there’s this: Lydia Hearst‘s romance with jokester Jeff Goldblum is still going strong. The model and heiress to William Randolph Hearst’s fortune has been linked to the Jurassic Park star for a short while, and new photos of them have christened them the new odd couple of 2011. At 58, Goldblum is 32 years older than his pretty young thing.

Could there be trouble in paradise? After only a few months of marriage, Chelsea Clinton‘s new husband Marc Mezvinsky has ditched his hedge fund job to ski for a few months in Wyoming. This also means he’s leaving Chelsea back at their New York apartment, although she”ll reportedly visit him “every few weeks.” Another source says the newlyweds are “really happy” together. So happy they need a few states in between them? Interesting.

It’s a battle of the aging musicians. Elton John is picking a fight with Billy Joel, who’s recuperating from hip-replacement surgery. Elton told Rolling Stone that, “at the end of the day, [Billy’s] coasting….It’s either fear or laziness. It upsets me.” Elton also blamed Billy’s alcoholism, for which he’s gone to rehab twice, on why they”ve canceled tour dates in the past. Billy, for his part, responded that “Elton’s just being Elton,” and that he won”t let the comments get him down.

Mazel tov to W magazine editor Stefano Tonchi and his art gallery owner beau, David Maupin. The longtime couple is rumored to be getting married Friday in Massachusetts, one of the five states where same-sex marriage is recognized in the U.S. They”ve been together for 25 years and are reportedly expecting twins through a surrogate. Just imagine how fashionable those baby clothes will be! 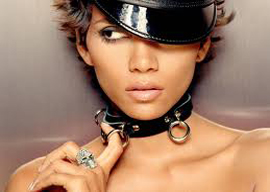 Halle Berry and Gabriel Aubry seemed like the perfect couple: Tall and gorgeous, they kept their romance under the radar, and had a beautiful baby to boot.  But their split has allowed ugliness to rear its end, and accusations are flying fast and furious. Sources have been saying her model ex, who is white, once used a racial epithet against Halle, and that there are “serious concerns for her daughter’s well-being while with him.” Halle was also rumored to be upset he immediately jumped into a relationship with Kim Kardashian, and didn”t want her daughter Nahla to be anywhere near the reality star’s omnipresent TV cameras. Gabriel’s friends, meanwhile, are striking back, saying they pity the star for the low blows, and that he’s a “loving father.” Let’s hope nasty voicemails will not surface out of this.