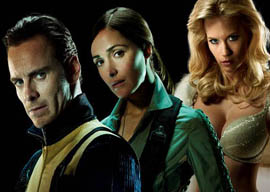 “Don’t you know who runs this town?” Artie thunders.

On the other hand, Singer’s director for this outing, Matthew Vaughn (director of 2010’s Kick-Ass), is highly not gay and not Jewish. His mom, a rich blonde flower child, told him he was the scion of TV star Robert Vaughn. But a blood test in the 1980s revealed the boy was the natural son of English peer George de Vere Drummond, whose surname the director has given the three children he’s had with his wife, German supermodel Claudia Schiffer.

When January Jones showed up pregnant in April, gossips immediately surmised that Vaughn must be the father. After all, they reasoned, Jones is such a terrible actress that to get the role she must have been sleeping with either the producer or the director. And since we can rule out Singer, that leaves only Vaughn. (He has vigorously denied paternity.)

First Class is difficult to describe coherently because its tone shifts frequently between Singer’s somber message (the film begins at Auschwitz) and Vaughn’s lighthearted interests. Singer’s allegory about the danger of another Holocaust if the gay Jews don’t run this town doesn’t coincide with Vaughn’s playful tribute to the early 60s, including Lockheed’s SR-71 supersonic jet and Marilyn Monroe (a bad Jennifer Lawrence, who was good in Winter’s Bone). Mostly, Vaughn displays a quasi-filial affection for knocking off James Bond movies. (The director’s ex-father, Robert Vaughn, starred in that hep mid-60s spy show The Man from U.N.C.L.E.)

Like Batman, Bond had no superpowers. But guns and gadgets look cooler onscreen than what Prof. X and Magneto are stuck with. To read minds, Professor X puts his finger to his temple like Johnny Carson playing psychic Carnac the Magnificent. To telekinetically move metal objects, Magneto squinches his face up and does jazz hands. These are pretty dweeby superpowers compared to the adamantine skeleton of earlier X-Men leading mutant Wolverine. (In First Class, Hugh Jackman has a cameo of two words, the second of which is “off.”)