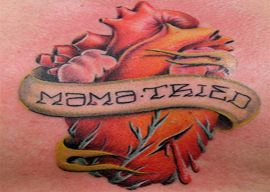 But it isn”t mommy’s fault. Your mother can”t even influence what you eat. In Free-Range Kids author Lenore Skenazy shows exactly how little influence we have over our spawn. She was vilified in 2008 for letting her nine-year-old son take the subway home alone. Even though he lived, she is still referred to as “America’s worst mom.”

I”ve known dozens of junkies over the years and they were all egocentric. They lie and cheat and steal and if you provide them with any kind of excuse for their awful behavior, they”ll cook it up and shoot it into their veins.

“Mama loved me so much, she smothered me and I was left with no survival skills. Now I need drugs to cope.”

“Mama didn”t love me enough and now I need to synthesize the feeling of warmth because I”ve never felt it naturally.”

“Mama was too lax and let pot become a gateway drug that inevitably led to the hard stuff.”

“Mama was too strict and heroin became a way to escape the stress of her iron fist.”

Ironically, the only way most of these junkies get clean is when mom cuts the cord and says, “Sink or swim.” After they get clean, you ask them what all that was about and they say, “I don”t know. I was full of shit. You should have punched me.” Nobody has less tolerance for junkies than ex-junkies. In fact, they are some of the few people I know who don”t buy this whole “it’s a disease” myth. After spending years wallowing in bullshit, they develop a very low tolerance for it.

I”m not saying your parents have no influence over your life. Being physically or sexually abused catapults the victim over the Wall of Culpability into the land of Not Your Fault, but what’s everyone else doing there? Your mother didn”t dole out the proper number of hugs and you think it’s her fault you”re committing slow-motion suicide? Today’s “different but equal” culture has provided those who are “different and subpar” a way to justify their terrible choices, but Michael’s mother was right. Actions have consequences. Junkies aren”t victims and they aren”t ill. They”re selfish liars who need a kick in the ass. The end.