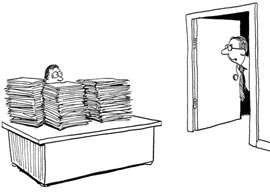 … such stuff as madmen
Tongue, and brain not; either both, or nothing,
Or senseless speaking, or a speaking such
As sense cannot untie.
Cymbeline, Act 1, scene v

All doctors have noticed that when one of their colleagues, goes over to the other side “ Management, I mean “ he soon begins to speak a kind of language that is neither colloquial nor technical nor philosophical nor literary nor precise nor poetic nor even quite human, howsoever clearheaded and lucid he may have been beforehand. The transformation usually takes about two weeks, but is then complete. A man becomes a talking robot.

A puzzle attaches to this. Do such a man’s utterances correspond to what is going through his mind, or does he have to translate his thoughts into this simulacrum of language? Or has some kind of virus entered his brain that has disarranged its language centres, rather as a stroke does, though in a rather more subtle way? (Has anyone performed post-mortem examinations on the brains of such people as a separate class?) And if his words correspond to his thoughts, how can he, as a man of education and feeling, bear the tedium of it?

“Managerialese is both a symptom and a sustainer of a social revolution.”

Medical managers are not, of course, the unique victims of this malady. It is pretty widespread in the public service and for all I know (and suspect) in the commercial sector as well, at least in companies large enough to function as bureaucracies. Indeed, it is quite probable that the ultimate source of the malady was those companies, and perhaps the business schools that trained their managers, as primates in the forests of Central Africa were the source of the Human Immunodeficiency Virus. Infection often escapes its original nidus to infect the surrounding population of the susceptible, in this case (managers in and of the public service) made susceptible by Mrs Thatcher’s ill-fated notion that the public service could be some kind of replica of private business.

I was on my way back by train from a murder trial in Manchester when two managers, who began to talk loudly in fluent managerialese, sat down opposite and next to me. Wanting to read, I thought at first to ask them to keep their voices down, but then I decided to take part in what scientists call a natural experiment: I would see how long they could keep it up. In the event, they were still going strong an hour and a quarter later, when I alighted the train. I felt slightly dizzy and relieved to get off.

They were either unaware of or unconcerned by the effect they were having on people around them. This was so even though I started to take down what they were saying, without in the slightest disguising what I was doing or that I was listening to every word that they said. The woman in particular spoke almost without stopping: her male interlocutor (and apparently junior in the hierarchy) barely managed more than a few words of incomprehensible jargon at a time.

At least a quarter of an hour before I realised what they were managers of I realised that they were managers in the public sector. Their vocabulary, their syntax, their intonation was unmistakable, at least to those who have had previous exposure to it. It could have been the NHS, but equally a local council, a school, the police, the social services: the world was their ring-fenced, blue-skies-thinking, passionately-committed oyster.

In fact they worked for the National Union of Students in some bureaucratic capacity. I don”t feel guilty about identifying them in this way because they were clearly not trying to keep either what they said or their identity secret, rather the reverse, if they were conscious enough of their behaviour to have been trying anything at all. In short, it was impossible not to overhear them.