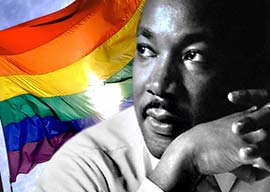 The next day, a Mississippi man was shot in the chest during a parade honoring King’s legendary (and, c”mon, far more famous) daddy.

The shooting occurred on Martin Luther King Drive in Jackson, MS. The 23-year-old victim and the shooting suspect have yet to be named, but police officer Colendula Green is on the case, and I only mention her name because, well, it’s one of those great black names, you know?

This tragic shooting at the MLK Parade on MLK Drive follows what is a darn-near epidemic”or, to put it as mildly as possible, a “spate””of recent stabbings, shootings, and other violent incidents that are sadly yet unfortunately related in some way to Dr. King’s legacy:

“¢ Right before Christmas, a San Antonio woman was stabbed by her boyfriend inside her home near the intersection of I-10 and Martin Luther King Drive. Three of her children reportedly witnessed the incident.

“¢ In late December, a man was stabbed in his bicep while trying to defend the honor of his girlfriend from a mob that was harassing her on Martin Luther King Drive in Jersey City.

“¢ In the wee hours of New Year’s Day, a woman was stabbed on a DC Metrobus near the 2200 block of Martin Luther King Jr. Ave. SE.

“¢ In Detroit on January 2, 26-year-old Semeria Greene was charged with the stabbing death of her eight-year-old daughter, Tameria, at the Martin Luther King Apartments. And I”ll mention a neighbor of Greene’s, Kimyatta Craigmiles, merely because her name is so fantastic.

“¢ On January 4 a man claims he was robbed in a stairwell on the third floor of the Martin Luther King Jr. Transportation Center in Sioux City, IA. He says the suspect held him in a headlock and threatened to stab him.

“¢ On January 6, 19-year-old Marcus Turner died of multiple gunshot wounds to the chest in the 8400 block of South Martin Luther King Drive in Chicago.

“¢ A North Carolina woman named Tamika Sheral Laughinghouse was arrested in mid-January and charged in connection with a knife attack on Johnnie May Rasberry at Rasberry’s home in the 4200 block of Martin Luther King Drive in Ayden, NC.

“¢ This past Friday, 17-year-old Tyrone Lawson was fatally shot outside a high-school basketball game, also on Martin Luther King Drive in Chicago only eleven blocks from Marcus Turner’s murder earlier in January.

“¢ In Long Beach, CA on Friday, two shootings occurred on the same day as the city’s MLK Parade.

“¢ This past Saturday, a robbery suspect died in a car crash while fleeing police on Martin Luther King Jr. Way S. near Renton, WA.

“¢ Of all these cases, the most tragic”i.e., “amusing””is the recent arrest of a 33-year-old Jacksonville man named Martin Luther King in connection with a January 9 triple shooting in which one man died. King allegedly used a dreaded “assault rifle” and wore a facemask while attacking his victims as they innocently played a game of dominoes.