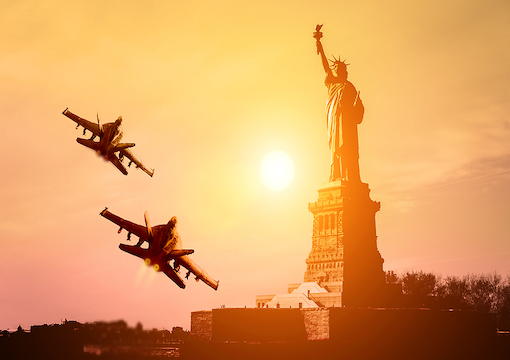 White male aircraft carrier fighter pilots were the heroes of the 1986 hit movie Top Gun. But today, white men are the designated villains in our culture. Yet the profession of carrier fighter pilot remains almost 93 percent white male, as Military.com reported in 2018:

Data provided to Military.com from the Navy shows that of the 1,404 pilots who fly Navy F/A-18 Hornets, only 26 are black and only 71 belong to any minority. There are only 33 female Hornet pilots in the Navy, according to the demographics, and just one is non-white.

After all, what have American white men ever contributed to aviation? I mean, besides inventing it in 1903, winning the Battle of Midway, going to the moon, and achieving global air supremacy over the past half century…

How then could Tom Cruise make a sequel to his It’s Morning in America Era blockbuster without betraying either the spirit of this age or the reality of naval aviation?

“Only a certain fraction of Hollywood conservatives dare announce themselves. But if you watch carefully, you can see clues.”

Well, he’s Tom Cruise, and as he’s proved over his remarkably extended career, he’s adept at presiding over the delivery of consistently above-average action movies. Tom Cruise’s name above the title is your assurance that he’s assembled outstanding experts and made sure they’ve all given it their best shot.

What Cruise’s brain trust came up with for Top Gun: Maverick, a sequel arriving a remarkable 36 years after the original, is to have plenty of diversity casting—for instance, the final mission to blow up an under-construction nuclear weapons facility in an enemy country, which demands the best of the best the Navy has, is comprised half of Aviators of Diversity.

But, and here’s the brilliance, the diversity casting is solely in fungible supporting roles, while the great majority of the film’s considerable drama consists of the main six white male dinosaurs butting heads.

The striking result: Everybody loves Top Gun: Maverick, with the film earning $296 million domestically through its first two weekends, drawing back to movie theaters huge numbers of over-35-year-olds for the first time since Covid. Critics were near unanimous in giving it their thumbs-up.

Cruise, of course, returns as the now-middle-aged flyboy Maverick (all characters are known by their colorful radio call signs, which helped me keep track of the plot). He’s a legend but also the Navy’s oldest officer still stuck at the rank of captain. (His romantic interest is played by the lovely Jennifer Connelly as the owner of a bar catering to pilots, presumably modeled upon Pancho Barnes in The Right Stuff.)

Maverick’s commanding officers—played formidably by an antediluvian Ed Harris, 39 years after he was astronaut John Glenn in The Right Stuff, and Jon Hamm of Mad Men—want to pension off their hotheaded handful. The now-octogenarian Harris gets to deliver the opening lecture to Maverick on how you pilots are living in the past, that the future belongs to my unmanned drones.

Iceman gives Maverick one last job, back at the Top Gun facility. This grad school for dogfighting opened in 1969 as one part of a vast American effort in response to the shortcomings of our air power that were revealed over Vietnam. In the 1970s and 1980s, improved training, warplanes, electronics, and systems integration allowed the U.S. to come to dominate the world’s skies, paying off in a nearly nonviolent victory in the Cold War.

Maverick’s orders are to train and select the young F/A-18 Super Hornet pilots who will fly a near-impossible mission (reminiscent of Israel’s strikes on Iraq in 1981 and Syria in 2007) against the nuclear weapons program of an unnamed enemy.

This mysterious country has the snowy mountains of North Korea and the brand-new fifth-generation Su-57 fighter of Russia, but it also must have once been an American ally like Iran because (in an important plot point) its air force still flies some of the ancient F-14 Tomcats that Maverick piloted in 1986.

Why the Navy must send its 1990s Super Hornets up a narrow, winding canyon to the reactor during daylight rather than sortie its immensely expensive F-35 stealth aircraft at high altitude at night is explained away in one line that boils down to: “It makes for a better movie.”

Perhaps realistically, the politics of the attack are of no interest to the pilots, who instead focus on the technical challenges and their standing in the eyes of their peers.

The twelve aviators vying for the six spots in the action are, of course, far more diverse than the 1986 cast, but they tend to blur together. The most interesting of the younger characters are the two white guys: cocky Hangman (Glen Powell) and moody Rooster (Miles Teller). Rooster is the son of Goose (Anthony Edwards), Maverick’s backseat weapons system officer whom his reckless piloting got killed in the 1986 original.

I must confess that I didn’t actually remember the plot details of the three-dozen-year-old first movie. But the new one will adroitly remind you of what you need to know.

In 1986, I wasn’t that blown away by Top Gun because it used the same “MTV cuts” to simulate dangerous velocity as The Right Stuff had relied upon back in 1983. Philip Kaufman’s movie about test pilots was stuck with the problem that test flights in a straight line are visually tedious, so it amped up the excitement level via music video editing. I’d greatly admired The Right Stuff (although it’s hard to watch now), but I was tiring of its technique by 1986.

Moreover, Top Gun’s subject of dogfighting is full of visual interest. Yet Tony Scott’s chaotic Right Stuff-style cutting made it hard to keep track of what was happening. The sequel directed by Joseph Kosinski has such an ample budget that the flying scenes are more visually coherent. Still, I would have appreciated a few long tracking shots to help me get oriented about how dogfights play out.

But back in 1986, my quibbles were rare. While critics were unenthusiastic for political reasons, the public was thrilled. Indeed, a myth has since emerged that during the Reagan Era, Hollywood was out-of-the-closet conservative.

But it’s likely that little has changed: In both eras, the movie industry imagined itself as indignantly progressive. Yet so many of its most memorable movies then and now are conservative tales of heroes.

Only a certain fraction of Hollywood conservatives dare announce themselves. But if you watch carefully, you can see clues.

For instance, the previous collaboration of Cruise and Kosinski, the 2013 science fiction film Oblivion, has Cruise patrolling a postapocalyptic depopulated Earth to keep down the bad guys. But he comes to slowly realize that his designated enemies, the human rebels, are actually the good guys and that he’s working for the alien invaders who have subjugated the planet.

In the most on-the-nose scene in Oblivion, Cruise rappels into the ruins of the New York Public Library, finds one book, Thomas Babington Macaulay’s Lays of Ancient Rome, and opens it to these lines:

To every man upon this earth
Death cometh soon or late.
And how can man die better
Than facing fearful odds,
For the ashes of his fathers,
And the temples of his gods?