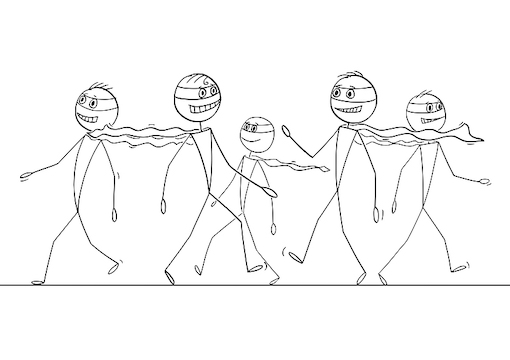 The Russian evolutionary anthropologist Peter Turchin coined the term “elite overproduction” to describe the condition of a society that is producing too many potential elite members. These potential elites jostle for positions that are declining in number relative to the increase in elite members. This game of musical chairs creates conflict as these elites engage in a struggle for power within society.

His choice of terms is a bit misleading, as his description of elite overproduction in America is better understood as an overproduction of people who see themselves as potential elites, despite being mediocrities. He points to the glut of lawyers as an example of the excess of people who wildly overestimate their ability. The number of people toting around an MBA is another example of this phenomenon.

The primary appeal of Turchin’s theory is flattery. It is human nature to resent the people who rule over you. A theory of history that says the problem with the world is there are too many people like that know-it-all rumpswab at the office is going to strike most people as plausible. All of us imagine ourselves as the most rational person in the room, so elite overproduction turns a conceit into scientific theory.

“The American empire is plagued by stupid people with access to power.”

Turchin’s argument is aided by present reality. Jake Sullivan is the United States National Security Advisor to President Joe Biden. He was the primary architect of the plan to leave Afghanistan. A quick look at his résumé shows that he is laughably unqualified for the position. He is an overeducated idiot who is sure he is the smartest man in every room, despite being one of the dumbest men in every room.

How did a vacuous airhead like Jake Sullivan get into this position? The system selects for mediocrities who will never question their superiors and do not possess enough talent to cause them to worry. In other words, the system selects for increasingly dumber people who are festooned with increasingly absurd credentials. Jake Sullivan is a Rhodes Scholar with two degrees from Yale University.

In a more rational society, Jake Sullivan would be the accounts-receivable manager at a midsize company. He not only would be qualified for the position, but he would also be happy with the arc of his life. More important, he would have no illusions about his talents and his role in life. Jake Sullivan would never have started out in life imagining himself as a member of the elite. He would have known his place and been happy with it.

This is not unique to the civilian side of the ruling class. The military has been infected with a plague of credentialed mediocrities as well. In fact, this has been a problem for a long time now. It is easy to forget, but the army advertised as the greatest fighting force in human history has not won a war in generations. Within this decade there will be no one alive who remembers the last time America won a war.

Another mediocrity involved in the Afghan debacle is General Milley. He is the chairman of the Joint Chiefs of Staff. People may remember him from his appearance in front of Congress earlier in the summer. He was kitted out like a third-world dictator with a chestful of ribbons and medals. The general spent his time fighting back tears as he told the congressional committee of his struggle with white rage.

Milley, another product of New England, is a Princeton man, where he graduated with a degree in politics. Then it was a master’s in international relations from Columbia and then another master’s from the Naval War College. His military career has mostly been about avoiding any real danger and making sure the people above him are happy with his personal service. Milley is a career rumpswab.

Milley has risen to a position far beyond what his talents should merit. Like Jake Sullivan, he should have ended up in a middle-management position or perhaps as a gym teacher at the public high school. At no point in his life should he have imagined himself as a member of the elite. Instead, he should have had an otherwise uneventful life as a member of his local community. He would have known his place and been happy with it.

Another thing you notice about the mediocre men who now dominate the elite levels of society is that they have faced little resistance. As H.G. Wells put it, “intellectual versatility is the compensation for change, danger, and trouble.” Look around the American elite and you find few who have faced danger or trouble. Therefore, they have never had to develop what little talent they naturally possess.

Men like Sullivan and Milley are good examples of Turchin’s thesis. They are not men who have risen to the top through merit. Instead, they have been pushed up into the elite by the overproduction of a synthetic elite. The system seems to produce more narcissistic mediocrities than society can absorb. As a result, the American empire is plagued by stupid people with access to power.

The main defect with Turchin’s theory is that the relative distribution of intellectual capital in a society is constant. What changes is the size of the smart fraction. This is the portion of people who possess the minimum cognitive ability to manage the institutions of a complex society. The more complex the society, the greater the minimum cognitive ability required to be in the elite.

As American society increases in complexity, the relative number of people who possess the minimum cognitive ability to manage the institutions declines. One result of this is that the number of people lacking the minimum cognitive ability increases relative to the demand. In other words, the plague of mediocre men is not just a problem of overproduction, but also a problem of demand. Someone has to be a general.

Another defect in Turchin’s theory is that it does not explain why we have suddenly started to produce waves of mediocre men with delusions of grandeur. For most of American history, no one would have indulged people like Sullivan or Milley. They would have been told in various ways to set their sights lower. They never would have imagined themselves in the elite. They would have been happy as average men.

What has changed is the explosion of liberal democracy in the 20th century. Once the population comes to believe that every opinion is equal to every other, there is no reason to submit to anyone’s opinion. In a world where criminals and imbeciles have the franchise, how can there be an elite at all? If the simpleton’s opinion is equal to the business owner’s, then all opinion is equal. In a democracy, every man is a king.

The ultimate cause of what we are seeing is multivariate and debatable. What is not debatable is that we are plagued by mediocre men with delusions of grandeur and access to power. As Africa has proved for 10,000 years, rule by stupid people must always end in disaster. Short of a mass culling of the ruling class, America will just have to wait for nature to solve the overproduction of elites.