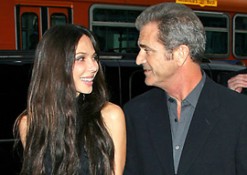 After last week’s nonstop Mel news, with explosive tapes being released daily, this was a relatively quiet week—until now. Now the witch hunt begins: who exactly sold the tapes to RadarOnline.com? One report points the finger at the younger sister of Oksana Grigorieva. Oksana has denied leaking the tapes, but now one source says “I suspect that if the authorities look at the sister [Natalie], they’ll find a wire transfer or a check to her from the website.” If Oksana was involved, she could be found in contempt of court. She’s also in hot water over a text message she sent Mel that could prove extortion.

Meanwhile, there are more reports of Mad Mel spewing hatred. Oksana claims Mel told her “I want Jew blood on my hands” after his anti-Semitic rant was leaked years ago, and that he hired a team of private investigators to follow a famous Hollywood figure and wanted him “stripped naked, kneecapped, and left in the heat.” Turns out that “Hollywood figure” is TMZ’s Harvey Levin, who’s led the charge of anti-Mel coverage for a few years. But it also seems Oksana’s camp, who told Levin about the “plot,” had a few details wrong, making the validity of the violent story suspicious.

Moving on from kidnapping to bribery: Viacom chairman Sumner Redstone (who, it should be noted, is 87 years old didn’t like negative coverage of one of his upcoming shows involving an all-girls band named the Electric Barbarellas, and called to let the reporter know it. Redstone left a rambling voicemail message demanding to know the source of the story. “We’re not going to kill him,” Redstone says, “we just want to talk to him” and he promises the reporter will be “rewarded” for spilling the name. Now the voicemail is all over the Internet, but Redstone doesn’t seem to mind. A Viacom source says Redstone is “loving” the scandal and “he likes people to know he’s still alive.” If a little press is doubling as his Fountain of Youth, expect Redstone to be making more calls.

Even though Tinsley Mortimer’s show High Society was canceled before its second season, we were at least relieved she could find solace in the Hamptons all summer with boyfriend Brian Mazza. She was seen nearly every Saturday at a club owned by the company Mazza works for, but last week, she was suspiciously out of the picture—and Mazza was seen chatting up a “beautiful Brazilian model” and “seemed quite smitten.” For Tinsley’s sake, we hope they were just talking business.

Finally, someone who’s having a decent week: Brad Pitt and Angelina Jolie have settled their lawsuit against the News of the World tabloid. The paper reported in January that the couple was about to split (but hasn’t everyone been claiming the same thing?) and that they visited a divorce attorney. The A-listers struck back and won, with the paper agreeing to publish an apology and settle for an undisclosed amount. Unsurprisingly, the money will go to the Jolie-Pitt foundation. And everybody’s a winner!

This is the way all classic love stories begin. Former Dancing with the Stars winner Julianne Hough, who’s currently dating American Idol‘s Ryan Seacrest in the latest hush-hush Hollywood romance, said she turned down all his advances in the beginning because she “thought he was gay.” Hough, who is 22, also said the metrosexual host was after her since she was 18. Seacrest, who is 35, “wasn’t her type” but she went on a date because he was persistent and their relationship blossomed from there. Funny how things can change on a dime.

And the summer of love rolls on. Orlando Bloom and Miranda Kerr are now married after a “secret” wedding earlier this week. The couple, who have been dating for three years, became engaged last month, and the rush to the altar has raised some suspicions that the Victoria’s Secret model is pregnant. In the past, Kerr has said, “I have always been very open about wanting to be a mother one day and I’ve always thought Orlando would be a great dad.” Well, he hasn’t starred in a decent film in ages, so maybe settling down in the right way to go.

Simon Cowell is in trouble again. A disgraced contestant from Britain’s Got Talent is trying to sue the host for publicly humiliating her. Fifty-four-year-old Emma Czikai is seeking $3.8 million because Cowell allegedly broadcast her awful rendition of “You Raise Me Up,” even after she wrote to him saying she suffered from a medical condition that made her unaware of how terrible her performance was. She wants to retrain “self-respect and dignity” with the suit. More likely, it will result in her song being viewed millions of times on YouTube.

Start the royal wedding countdown. Notorious playboy Prince Albert of Monaco has set a date to wed South African Olympic swimmer Charlene Wittstock. The religious ceremony will be on Saturday, July 9, 2011, with the civil marriage ceremony taking place the day before. Consider this your save the date. But it’s not all wedding plans and roses for Prince Albert. A lawsuit against Monaco filed by a California writer named Robert Eringer is moving forward. Eringer claims he was retained as a “spymaster” for the prince and is suing over back pay. Hardly the type of thing one wants to deal with before marital bliss.

In other royal news, Queen Elizabeth II had a private sitting with renowned photographer Harry Benson. Benson, who first photographed the Queen in 1957, visited Scotland to snap a few for the Scottish parliament.