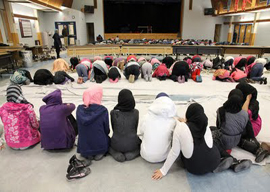 Predictably, a few Canadians chimed in that letting Muslims pray for the death of Christians and Jews on public property was simply a heartwarming example of the country’s multicultural “tolerance” and “diversity.”

However, I doubt anyone anticipated the force of the backlash against the “mosqueteria.” The National Post, for one, felt obligated to delete hundreds of angry “anti” comments. Otherwise, blogs and talk radio provided citizens with their own Speakers’ Corners. And Canadians spoke up.

Terrified by the prospect of being hauled before our Human Rights Tribunals (one of which recently fined a stand-up comedian $15,000 for “discrimination,” i.e., yelling at two drunk lesbian hecklers), Canadians have a well-earned reputation for quietude.

But contrary to what our establishment elites insist, it’s not that we’re more “polite” than our “boorish/fat/stupid/violent” neighbo(u)rs to the south.

No, it’s that, as Mark Steyn put it, even when ordinary brainwashed Canadians across Trudeaupia “feel their multiculti pieties wobbling just a bit, they can no longer quite articulate on what basis they’re supposed to object to it. Indeed…the very words in which they might object to it have been all but criminalized.”

Indeed. Yet the “mosqueteria” has emboldened not a few of my fellow citizens to ask:

Why has Canada spent billions of tax dollars—and lost over 150 servicemen—in Afghanistan, ostensibly to discourage Muslims from treating women as second-class citizens, while doling out more tax dollars to let them do that over here?

“First of all, where do these Muslim kids wash before and after praying in the cafeteria?” one woman wondered. “Are teachers mandated to help shift around tables and chairs to make room on the floor when they resist staying after school hours to assist in extra-curricular sports/drama activities?…Who has paid for the mats and Qura’ns [sic]…?”

Who are the appointed “menstruation inspectors”? The teachers? The imams? The boys who’d formerly played hooky?

Belligerent Muslims come as no surprise. It’s their infidel enablers and defenders that have me confused (again). After all, they’ve spent the last 50 years somberly instructing the rest of us that:

• “Separate but equal” is no kind of “equality” at all.

• Children from different groups should be integrated by force (in, say, the city of Boston) against their parents’ wishes.

• Women who refuse to “sit at the back” of anything (like, for instance, buses owned by private companies in Montgomery, Alabama) are national heroes—and those who enforce longstanding regional or cultural segregationist habits are villains.

I must admit: Watching Canadian progressives twist themselves into advanced hot yoga positions trying to square “tolerance” and “multiculturalism” with “sexism” and “segregation” has been a rare treat.

Witnessing the rest of the country telling them (and their Muslim pets) to shut the hell up has been even better.