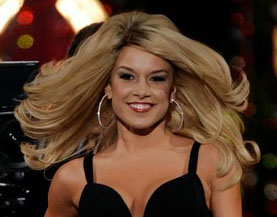 Does this represent a crisis in American gender identity? Perhaps, but consider the judges. One who stands out of the crowd is the viperous harridan Joy Behar. What qualifications does this venomous reptile have to judge anything female? Her main occupation seems to be blubbering inanities on a television show designed to encourage women to become shrieking, indignant harpies. Joy Behar belongs in a naturalistic zoo exhibit as a warning to small children that extreme feminism results in both internal and external ugliness. Debbye Turner Bell, another judge, at least won the crown in 1990 and has been making a living as a television reporter for CBS Evening News. I suppose this makes some sense, though television reporters are not known to be among the higher life forms. I’ve known marine invertebrates who were more personable. Taryn Rose is an orthopedic surgeon cum shoe designer. OK, I get it”girls like shoes, and, like, ra-ra girl power. Marilu Henner is an American actress (the redhead from Taxi) who seems to favor the type of physique achievable by older women with some determination and anabolics: muscular sacks of potatoes. Mark Cherry is a gay guy who wrote Desperate Housewives“a dispiriting work of cultural Marxism designed to portray suburban life as some Gothic horror show. Tony Dovolani is a Hollywood ballroom dancer who claims to be a heterosexual. Mark Willis, as a country and Western singer, is the closest thing to a normal heterosexual male in the entire panel. You’ll have to pardon me for noticing that the only obvious heterosexual male on the judging panel is not exactly a strapping example of manhood, and that three of the four women are considerably more dominant and mannish than he is.

Considering the judges, it is no surprise that the contestants were mostly devoid of recognizably female secondary sexual characteristics. The women who weren’t looking for a teenage boy probably despise actually attractive females, the gay guys were looking for teenage boys, and the sole forlorn normal heterosexual male didn’t have the type of strong jawline required to stand up to the hen-like cluckety-cluckers who selected this freak show. Since the organizers are not going to allow a regular Joe like myself or grand society types to be on their ever-so-fabuloso panel of judges, can we at least pick a panel less obviously deranged? Perhaps we can outsource the job to the Colombians, Ukrainians, Indians, or some other primitive culture which still maintains a sentimental affection for sexual dimorphism.

I find myself uncomfortably on the side of grouchy feminists who wish to do away with such contests. What possible social purpose could it serve to elevate such women in the public eye? How horrible it would be for some young girl to try to emulate what appear to be brutish transsexuals? Talk about unrealistic body images: Many of these women look like the Creature from the Black Lagoon. What about young men who grow up with these humanoids as their image of female perfection? Will they be ready to defend civilization? Will they be inspired to build marvelous structures and develop amazing new technologies? Or will they take up playing video games after figuring that women are better equipped for battling the barbarian hordes? If this is the best our culture can muster, those barbarian hordes can’t come too soon.