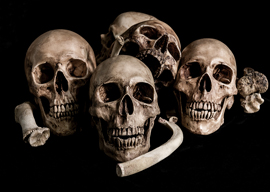 White Southern society had to be destroyed. And although Abed is discussing an episode from the past, his point holds tremendous importance for the West at this very moment in history. Genocide is not always the physical extermination of a people. Sometimes it can be the erasure of their identity. Southern whites were “stripped of an identity that gave meaning to their lives.” Take away their identity, “annihilate” their “way of life,” and you’ve committed genocide, at least under the definition Lemkin originally promoted. We might disagree with Abed that the genocide (or perhaps more accurately, attempted genocide) of Southern whites was both “moral” and “required,” but we can certainly thank him for his honesty. This is exactly the kind of “genocide” the indigenous whites of Europe face today.

Does Abed agree? Well, I asked him. With millions of Muslim immigrants streaming into Europe, displacing the indigenous whites, altering their way of life, and redefining their identity, can this be seen as a genocide (or genocide in progress) of indigenous white Europeans?

It would be very peculiar to suggest that in migrating to various European countries, individuals, families and other small social collectives intended to systematically upend the norms, practices and traditions of those societies. Peculiar, to begin with, because of the scale of such a project (it is not the sort of thing that individuals or small social units typically intend). Peculiar, secondly, because although it was no doubt the case that people were motivated to leave their countries of origin by a wide range of considerations, I suspect that the desire to make a better life for themselves and future generations of their families was one of the most common. If this is the case, then surely there must be something about the traditions, practices and norms of European countries that are valued and respected by immigrants. But then why set out to systematically undermine the social, cultural and political foundations of those societies?… Why would immigrants attempt to systematically undermine norms and institutional structures that guarantee their democratic freedoms, including their right to be culturally different and to practice their religion without hindrance?

Abed’s belief that what we’re witnessing in Europe right now is not genocide is predicated upon his faith that the immigrants want to keep their newly adopted nations exactly as they found them. I would respectfully counter that this is not only false, but pure fantasy. The very idea that these Muslim immigrants—many, perhaps most, of whom cling to identity (religious, ethnic, racial) in a way that most in the West no longer do—intend to respect rather than exploit Europe’s tolerance and freedom is laughable. If Abed wishes to argue that not every Muslim immigrant wants to ban pork, close bars, enforce the niqab, and establish Sharia law, I’d counter that this is irrelevant. Not every Union soldier and bureaucrat on Southern soil was in favor of Radical Reconstruction and the dismantling of white supremacy. It didn’t take every Northerner to carry out Abed’s “morally required genocide.” Just enough of them.

Abed does concede one point—if it’s genocide (which, to be clear, he does not believe it is), it’s one that cannot be pinned solely on the immigrants:

It seems to me that Muslim immigrants are not the only agents of change in the countries you mention. Western European societies have changed, in large part, because their governments and the non-immigrants they represent have wanted them to change. For example, Western Europeans have, on the whole, become less religious and perhaps less attached to the traditions and values of old Christendom.

Well, on that much we agree.

One-on-one, Professor Abed comes across as friendly and humble, and it’s not my desire to get him into trouble by giving exposure to his views. In fact, I’d suggest to CSULA President Covino that this is exactly how intellectual disputes between people with radically divergent views should proceed: cordially, respectfully, and without violence, intimidation, or censorship. That cowardly goombah could learn a thing or two from this column.

Professor Abed’s thesis should be taken seriously. I am all in favor of expanding the definition of genocide as Abed has (and as Lemkin originally intended), and I’m equally in favor of applying that definition to the events transpiring right now in modern-day Europe. Although I don’t believe he intended it this way, Abed’s thesis is not just a philosophical argument, but a blueprint for how genocide will come to Europe.

It also serves as a justification for those who believe that this genocide is “morally required.”