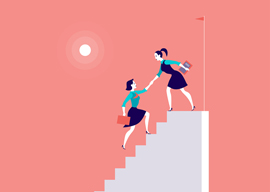 It is only through ignorance or suppression of the truth that anyone can believe in the leftist worldview, a kind of bad morality play that would be merely amusing were it not so influential.

Of this feminism is a representative example. Motivated by status envy, which is a reflection of human nature’s difficult need for esteem, feminists have a perverse conception of history. It never seems to occur to them that men no more chose their greater physical strength and, yes, greater ability to engage in abstract thought at the highest level than women chose to be mothers, with all the grueling burdens that accompany that fate.

“The large institutions [of the world] have almost all been created by men,” the psychologists Roy Baumeister and Kathleen Vohs have written.

The notion that women were deliberately oppressed by being excluded from these institutions requires an artful, selective, and motivated way of looking at them. Even today, the women’s movement has been a story of women demanding places and preferential treatment in the organizational and institutional structures that men create, rather than women creating organizations and institutions themselves.

For reasons that are beyond anyone’s control, and in regard to which resentment and blame are incoherent, it fell to men to create the marvelous achievement that is civilization. Yet men’s greater power outside the domestic sphere, we must understand, is symbiotic with women’s greater power therein: Nature’s balance this is, which we alter at our peril.

What is more, while civilization and culture at their highest are the work of a minority of men, still even these accomplishments correspond to biological needs and desires that, for the most part, have been in the service of women and children. And indeed, serving women and children, providing for and protecting them, has been the primary purpose of most men in history.

“Like men, women are not fair-minded, and there are sensible reasons for that.”

As if they wanted to confirm the truth of female hysteria, feminists reduce human life to a silly binary: man, bad; woman, good. Or, man, oppressor; woman, oppressed. What gives the lie to this is women’s relations with other women. In recent months we have seen spectacles of group shaming and vicious gossip whereby women have sought to ruin men’s lives. What many people don’t know is that such phenomena stem from the very nature of women, and nobody knows this better than women themselves.

In a study published last month in the Journal of Experimental Social Psychology, Tania Reynolds, Roy Baumeister, and Jon Maner found that women, in their fierce intrasexual competition, use gossip and manipulation to “undermine the romantic and social appeal of same-sex romantic rivals who are perceived to be threatening.” That women would do so is supported by a 2009 study in the same journal, which found that women are more attracted to men who are taken. Just as many women are quite willing to falsely accuse men of sexual harassment and of sexual assault, so women employ their preternatural skill at deception against their fellow women. Like men, women are not fair-minded, and there are sensible reasons for that.

To be sure, Reynolds et al. are not on new ground. Writers have been representing the unscrupulous craftiness of women for centuries. In his essay ”On Women” (1851), Arthur Schopenhauer wrote:

As lions are furnished with claws and teeth, elephants with tusks, boars with fangs, bulls with horns, and the cuttlefish with its dark, inky fluid, so Nature has provided woman for her protection and defence with the faculty of dissimulation, and all the power which Nature has given to man in the form of bodily strength and reason has been conferred on woman in this form. Hence, dissimulation is innate in woman and almost as characteristic of the very stupid as of the clever. Accordingly, it is as natural for women to dissemble at every opportunity as it is for those animals to turn to their weapons when they are attacked.

Physically weaker than men, and bearing within themselves the future of the species, women rarely find it in their best interests to be overtly aggressive. It’s far more effective, indeed, to be a fox than a lion.

But it’s precisely because they cannot afford to be straightforward like men that women are more resentful and vindictive than men. Passive where a man is active, a woman simmers and simmers, and when she does exact revenge, it is by subterranean means. This is another truth that poets and novelists have long depicted.

The psychologist Leonard Berkowitz has argued that pain and “aversive” stimuli generally beget feelings of anger and blame. They are followed by a desire to punish. Well before Berkowitz, Nietzsche argued that the will to punish is the very essence of morality, a complex drive that produces a creative inversion of natural instincts. Women are not less inclined to the will to punish than men; again, they are simply more covert.

The greater subtlety of women is lost on most men—but not, of course, on women themselves. They know it only too well, and therefore will readily grasp the truth of Schopenhauer’s observation:

It is natural for a feeling of mere indifference to exist between men, but between women it is actual enmity. This is due perhaps to the fact that odium figulinum [trade jealousy] in the case of men, is limited to their everyday affairs, but with women embraces the whole sex; since they have only one kind of business. Even when they meet in the street, they look at each other like Guelphs and Ghibellines. And it is quite evident when two women first make each other’s acquaintance that they exhibit more constraint and dissimulation than two men placed in similar circumstances.

This underlying antagonism of women naturally turns up in the workplace. Thus, Allison Gabriel, assistant professor of management and organizations at the University of Arizona’s Eller College of Management, in her recent studies of men and women in the workplace, “found consistent evidence that women reported higher levels of incivility from other women than their male counterparts…. [Women] are ruder to each other than they are to men, or than men are to women.” And the more assertive the women were, the more rudeness they received from other women. Hence, while feminists are forever urging women to be “strong and independent,” women’s biggest obstacle in doing so is likely to be other women.

Gabriel’s work concerns perceived aggression. Yet such is the nature of women that, where a man will act on his anger or resentment, a woman often will do nothing at all. She may even disappear from one’s life. Or, as people now say, “ghost.” A year ago, in her article for Time magazine “Why Friends Ghost On Even Their Closest Pals,” Deborah Tannen described the considerable pain this causes women. Tannen tells us that she herself has been ghosted on. And yet, her article is superficial and would have been more insightful if she had compared the ways of women to male directness and to the distinctly male notion of duty. I will add that the moral evil of ghosting reflects the general decline of manners and morality in our time. Indeed, I am old enough to remember when people took it for granted that we owe each other an explanation and a sense of where we stand in regard to each other. Common courtesy, in other words.