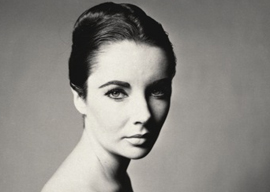 The world lost one of the greats this week with the passing of Elizabeth Taylor. The much-heralded actress lived a life larger than most: two Oscars, eight marriages, and countless headlines later, the Dame passed away on Wednesday at the age of 79. Remembrances deluged the papers, yet it was Liz herself who could always make the best news. Her funeral began 15 minutes late, a request she made prior to her death”and surely, no one would ever mind waiting on the violet-eyed beauty. A small group (including Colin Farrell) attended the services at Los Angeles” Grand Mausoleum, where Michael Jackson is also interred.

It’s a bit gauche to discuss, but we”ll dive in anyway”now there’s talk about where Taylor’s fortunes will go. (Her White Diamonds perfume is still the biggest celebrity fragrance on the market and she’s said to be worth more than $500 million.) Her four scrappy kids were already fighting over how the money would be dispersed last year, but there’s a wild card involved: Jason Winters, her longtime assistant and right hand man, may be the recipient of all that cash. If so, he’s expected to give some of it away to AIDS charities, which is how they met. As Dame Elizabeth grew more eccentric in her later years, she was still beloved by those closest to her.

It’s more depressing than usual to cover Lindsay Lohan news when the talk comes directly after the death of the biggest star in the world, but even drug-addled twentysomethings have their idols. Lindsay’s mom is floating the rumor that her daughter is going to change her name and, like Cher, Madonna, and yes, even Liz before her, just go by “Lindsay.” She wants a fresh start and to drop all associations with her trainwreck father, Michael Lohan. Good luck to ya.

Oh wait, there’s more! Lindsay’s also said to be furious over new photos of her ex-girlfriend Samantha Ronson making out with a brunette. She thought they were exclusive! Ah, but those lips say otherwise.

Here’s a do-it-yourself way to stall your own quasi-successful public rehabilitation: Give a national interview, refuse to answer questions, throw very loud hissy fit in dressing room, break a window with a chair, storm out onto the streets shirtless. Chris Brown gave it a try on Good Morning America this week, and left a bad taste in the mouths of fans”and anchor Robin Roberts, who said Brown vetted her Rihanna questions beforehand. His publicist has suspiciously quit after the tirade. Thanks for reminding us of your temper, Chris. The boys don”t change.