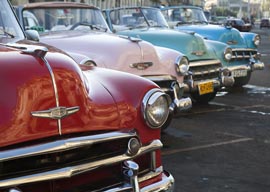 Friedan became an overnight sensation during the Sixties, when she published her book. The women she interviewed reminded me a lot of highly decorated soldiers who are interviewed and prompted by reporters. “So you instantly realized that your platoon was about to be overrun, so you threw yourself up front….” says the hack. “Yeah, if you say so,” answers the soldier. Men fight for their unit and react automatically to danger. Their lives and the lives of their buddies do not pass before their minds and in Technicolor to boot, just before they act. Ditto for women being interviewed by other very intelligent women about lost opportunities.

The Fifties were great. The young were split between those wearing suits, ties and had short hair. The girls had full skirts, high heels, and perms. The others were “greasers,” with long duck-tailed hair, blue-suede shoes, and a go screw yourself attitude. I belonged to the former group, but kinda liked the lack of respect of the greasers. And the girls that went out with greasers, secretly liked us squares, as long as we weren’t real squares, but pretended to be. It’s still the same old story.