My Night With The Rolling Stones 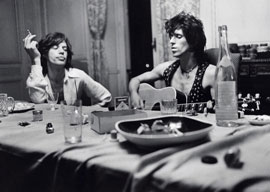 One of the pleasures of The Rolling Stones is that until recently they seem to have gotten by without a care for the bland pieties of the age. There have been no impassioned calls from them to end world hunger or get out of Iraq. Approached to perform at Live Aid in 1985, Keith Richards is said to have remarked that he “don”t give a stuff.” Later declining the opportunity to headline at a memorial show for the Princess of Wales, he told the organizers: “Sorry, didn”t know the chick.”

There may have been some unfortunate lapses from these standards of late, what with going around the world doing shows to “combat climate change” with Bill Clinton as their MC, but surely a big part of the Stones” allure over the years was simply their refusal to truckle”or, as one or more of them famously put it: “We piss anywhere, man.” They were the officially tolerated moral slobs of the middle class. Since Keith in particular was never meant to reach age thirty, his very survival is a reproach to the scrubbed, aerobicized figures bouncing around on today’s MTV.

He turns 70 today. Nearly forty years ago, I once spent the night under his roof.

“They were the officially tolerated moral slobs of the middle class.”

On the night of Feb 12, 1977 I was drinking with some friends in Portsmouth and I got the insane idea to spontaneously drive to Keith’s house, which was about a dozen miles away in West Wittering. I had absolutely no invitation and no reason to find anything at all when I arrived but a locked door, or, at best, some hefty security aide snarling at me to get lost.

It happened to be the 10th anniversary of the iconic 60s drugs bust there. In 1967 Keith had been relaxing there with his friend Mick Jagger and some other guests when nineteen police officers arrived in their midst. The law took away various substances, and at the subsequent trial Redlands was described as a scene of smoke-filled decadence out of some banned Arabian erotica, with frequent reference made to a young woman”Marianne Faithfull”who was lying shamelessly nude in front of the living-room fire. This was the group for me, I had immediately concluded.

Ten years later, I decided to drop in. I was then 21. It was an arctic-cold night, and Keith, dressed incongruously in a pair of shorts and a Hawaiian shirt, opened the door. That was the evening’s first surprise. Nobody seemed to be working the home’s security, and I remember thinking it odd that someone who had a couple of well-provisioned mansions in the West Indies would choose to spend the winter in rural Sussex. A kind of richly deserved scowl crossed Keith’s face when I announced that I was “just a fan.” Apart from that brief, scarcely perceptible contraction of nose and lips he expressed no further welcome. Dark-eyed and grizzled, he looked impressively wasted. However, a voice from the room behind him then called out, “Let him in.” When Keith did so, that was my second surprise. A third soon followed.

Turning the corner, I discovered that the voice in question was Mick Jagger’s and that the Stones” lantern-eyed drummer Charlie Watts was also in residence. Sitting between them were about half-dozen men dressed in a variety of polyester slacks and safari jackets. I later found out that the band was signing a new multi-million-pound deal with their record label, and experience had taught the suits that it was easier to take the papers to Keith than the other way around.

Here I was in the legendary Stones lair. A low level of haze hung around the place, and I spluttered a bit as I came in out of the cold. There was little furniture in the traditional sense, Keith apparently preferring slabs of stone, wolf-skin rugs, and brightly colored bean bags to the sordidly conventional world of tables, chairs, and beds. Over in one corner there was a scantily clad blonde I didn”t recognize lying supine on a hammock. A pair of razor-pointed dueling sabers hung somewhat intimidatingly over the roaring log fire where the earlier nude had once reclined. There was also a minstrels” gallery and a small in-suite greenhouse. (Keith made several trips there in the course of the evening.) The general impression was of a 1960s crash pad with submerged Olde English charm, with the owner’s characteristic touch of the piratical thrown in. In time, Keith thrust a pint mug full of an amber fluid into my hands and said, “Cheers.” He looked like he hadn”t seen daylight in years, with his thin, sallow face and stubbly beard but was still remarkably gracious under the circumstances. He asked me more than once where I was from. Keith winced when I reminded him of the date’s significance. “The fuzz are still a pain in the bum,” he said in his slurred Dean Martin voice. “Well, not really a pain, they”re more of a habit.”