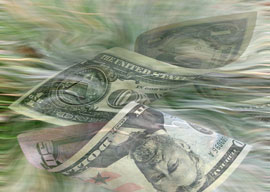 My websites have been predicting economic collapse for at least three years, thus bringing gladness to the hearts of many who are so attached to justice that they feel it will serve us right when it happens. They take solace in the idea that just because the collapse has not happened yet does not mean that it will not happen soon. The rocks are still there and the ship is still steaming toward them.

A more interesting question than whether the collapse will take place is why it has not so far taken place. The answer is the mutually assured rottenness of all currencies, which is a little like the Cold War’s mutually assured destruction.

Taken individually, every currency in the world is completely rotten and should be completely worthless. No one in his right mind and who considered the dollar or the euro or the yen or the pound in isolation would be so foolish as to exchange a tangible good for any one (or million) of them. What keeps them afloat is that all of them are rotten in the same way, with very slight variations at the margins, more or less to the same degree. Furthermore, in a world of rotten currencies no good currency can survive, for it would become so valuable that it would destroy the economy of the country that issued it. The Swiss had to tie their franc to the euro for fear of pricing themselves out of all markets (and Switzerland is one of the most industrialized countries in the West). A Swiss entrepreneur told me that if it had not been for the linkage of the franc to the euro, he would have had to sack at least 60 percent of his workforce. The Swiss had no choice, therefore, but to debase their currency. Gresham’s law, that bad money drives out good, is correct.

So long as we are all improvident together, and more or less to the same extent or order of magnitude, we should be all right and the economic collapse (which would also be a collapse of civilization) can be warded off. But what if a large and provident nation should arise? Oh, how pleasant it is to contemplate the horrors we should then deservedly suffer, pleasant as that is from afar.