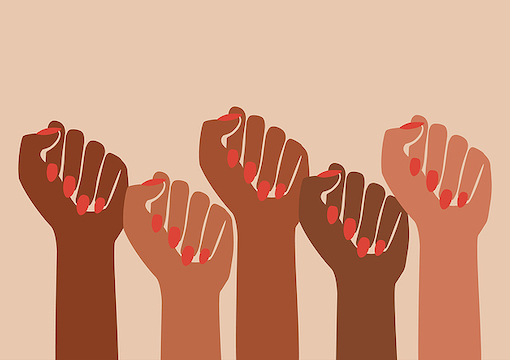 During the years between the Great War and the Second World War, the avant-garde of Paris developed a passion for black culture. Part of it was due to the trade in exotic items from French colonies in Africa and part of it was due to exposure to black troops from America and Africa during the war. The word “negrophilia” is derived from the French négrophilie, which means “love of the negro.”

The beautiful people of the day would collect African art, listen to jazz, and hang out at clubs where the Charleston was popular. Some of this back-washed into America in the Roaring Twenties. Jazz was popular with the urban intellectuals as a way for them to connect to black culture without violating the conventions of the day. America’s peculiar history with race, however, prevented overt enthusiasm for black culture.

A century later, a similar sort of frenzy has gripped America, but this time it is something of a religion rather than a fashion statement. Black people are being elevated to the status of magical beings, gods walking among us from whom we must seek both grace and forgiveness for the sins of the past. Last summer this worship of black people by the beautiful people burst forth with public foot-washing ceremonies.

“The great empire collapses in cynicism, pessimism, frivolity, and the lowering of moral standards.”

Since then, the public has been bombarded with this new religion. Television producers have been pumping out black-themed content. Video services like Amazon Prime and Hulu have special sections now for black content. White men have been replaced by black people in advertisements. Hollywood is rushing out a black Superman movie, written by one of the shamans of the new faith.

This is not the typical pandering the left has done for generations. This worship of black people is part of the new pogrom against white people, particularly white men. The new faith says that the current state of race relations is due to the systems created by white men, going all the way back to the beginning. The only remedy is to uproot the white supremacy culture and the people responsible for it.

This is why corporate America, government, schools, and even the military are giving every white person the new version of the Voight-Kampff test, which detects the presence of racism and white supremacy. It is not just white people under suspicion by the new racial commissars. The systems we rely upon to make life possible are now being scrutinized for possible white supremacy.

Again, this is not the same old race-hustling. The schools are now abandoning advanced math, because math is now deemed white supremacy. Darwin and the basics of evolutionary biology are being scrubbed from the books, because biology contradicts one of the tenets of the new faith. Mother Nature does not distribute her gifts equally, which is now a strictly forbidden bit of heresy.

A main driver of this effort to scrub the stain of whiteness from the culture is the need to gain both grace and forgiveness from blacks. This is not always made clear, as the people involved in these jihads against whitey are too focused on their rage to think much about what they are saying. By setting up blacks as the sole arbiter of what is and what is not racist, they are making them the ultimate judge, living gods.

That is not an overstatement. Colleges are instituting programs where white students are obligated to work toward forgiveness by the black students. “White accountability within anti-racist work is the understanding that what one professes to value must be demonstrated in action, and the validity of that action is determined by People of Color.” In other words, the new morality for white people is governed by black people.

No one has thought much about the implications. Last year, some “youths” were given a free pass for murdering a white man at the Frederick County Fair in Maryland. The reason the criminal justice system gave them that free pass is they claimed the white man used a racial slur. The fact that there was no evidence of this was never considered, because it is racist to question such claims. It was just assumed to be true and accepted as mitigation by the court.

What we have with this new religion is three main pillars. One is that black people are so special and precious, we must organize society to please them. Another pillar is that the condition of black people is not their fault, but the fault of white people and their white supremacy culture. The final pillar is that whites can only gain salvation by committing themselves to elimination of whiteness to the satisfaction of black people.

It is tempting to think that this new religion will crash into reality and go the way of other lunatic ideas. The spiraling crime rates are a good indication of what is to come. If the plan is to replace white men and white ways of doing things, then it means a world where planes fall out of the sky and urban water systems collapse. At some point, this reality will triumph over this new lunacy.

On the other hand, the ruling class shows no signs of faltering in their commitment to the new gods. The political class is launching an official inquisition into the white supremacy threat they swear is real. Presumably, they will be accepting spectral evidence and maybe bring back some of Torquemada’s tricks. The only way to defend “our democracy” will be to remove the only people capable of sustaining it.