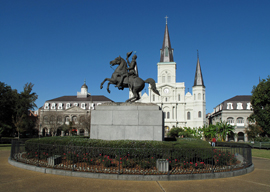 CHARLESTON, S.C.”The video of Robert E. Lee being taken off his pedestal”literally“was stunning enough, since that 1884 statue by Alexander Doyle is sculpted in a Florentine neoclassical style that just doesn”t exist anymore.

Even more shocking is where it happened.

The city of laissez les bon temps rouler really singled out particular monuments from the city’s multilayered history and targeted them for iconic destruction, like the Taliban?

But it gets stranger. The idol smashers also took down the equestrian statue of General Beauregard, their own Creole hero, a man whose first language was French and who, in keeping with the loyalty that Louisiana inspires, chose to remain in the hostile Reconstruction South after the war, working for universal black voting rights, rather than accept lucrative offers to lead foreign armies.

The Beauregard statue is yet another Alexander Doyle piece, and although it’s still possible to see Doyle’s work in other places”the National Monument to the Forefathers in Plymouth, Massachusetts, three figures in the National Statuary Hall in the Capitol”it’s a little soul-rattling to see the city we Southerners once regarded as our cultural capital suddenly acting like book burners. My favorite Doyle statue, perhaps because I walk by it once a week, perhaps because it depicts a journalist, is the bronze Horace Greeley monument in New York’s Herald Square. Greeley’s famous exhortation in 1865″”Go west, young man””is engraved on its base, making me wonder why he never took his own advice.

“If your argument is that monuments exaggerate reputations or causes and therefore need to be sledgehammered, you”re going to have a long list of candidates for the scrap heap.”

And, of course, that’s the period we”re talking about when we talk about these statues and monuments”the period after the Civil War, when the South had been destroyed. Is it surprising to anyone that Southerners”especially Southern women”would do what all defeated people do? They erected historical markers and statues and obelisks and pedestals of marble and bronze so that they wouldn”t be forgotten. Surely the people of southern Louisiana, with its history as a welcoming sanctuary for the misfits and outcasts and artistic geeks of the world, would understand the crushed spirits of half a country yearning for forgiveness and validation. Surely many of those broken people lived in the Crescent City themselves.

Lafcadio Hearn, the weirdest journalist who ever lived, a myopic Greek who had to leave a flourishing career in Cincinnati because he married a black woman, fled to New Orleans and ended up doing all his best work for the Times Democrat during the same years these monuments were being built. “Times are not good here,” he wrote to a friend in California. “The city is crumbling into ashes. It has been buried under taxes and frauds and maladministrations so that it has become a study for archaeologists. Its condition is so bad that when I write about it, as I intend to do soon, nobody will believe I am telling the truth. But it is better to be here in sackcloth and ashes than to own the whole state of Ohio.”

Hearn was just one of thousands who sought refuge in New Orleans and found redemption there. The city always accepted any kind of fugitive. Of course the morose Confederates wanted symbols and monuments in New Orleans, if for no other reason than just to shake off the oppression of the carpetbaggers. They wanted to lift their withered spirits.

Monuments built by humiliated populations are a means of healing. If the United Kingdom decided to remove the statues of William Wallace and Robert the Bruce at Stirling Castle, I would expect a reaction even more brutal than the mild confrontations last week in New Orleans”and those Scottish battles are 700 years old. Even more to the point: Why do the people of London allow a memorial to William Wallace at the location where he was hanged, drawn, and quartered? It’s not because they admire Mel Gibson’s portrayal in Braveheart. There’s a feeling in many civilizations that rebels”especially when the rebels are related by blood”deserve some measure of respect. The statement being made is not “We agree with your cause” but “We forgive.” This is something that occurs throughout the world, wherever blood has been shed.

Really? I don”t believe a statue that stood in the same place for 133 years suddenly reanimated and “reopened” wounds. The alleged wounding had to have another source. And to find that source, I”ve been repeatedly directed this week to the words of Mayor Mitch Landrieu, who was praised by The New York Times for his eloquence as he explained why the monuments had to come down. I encourage you to hear the speech. You can stream it on YouTube or read the complete text in both the Times and The Washington Post.

But I would also like to speak to Mayor Landrieu, point by point, because I was startled by his argument.

Part 1: Mayor Landrieu begins by reviewing the rich multicultural history of his city.

Agreed! It’s what made New Orleans what it is today. May it ever remain so.

Part 2: BUT, the mayor says, there are no historical monuments to the slave ships, to the sites of lynchings, to the beatings of the Freedom Riders.

Agreed! Erect the markers. The people who erect monuments to atrocities are also trying to reclaim their dignity. Let the slave markers rise alongside the Confederate generals.

Part 3: Now the mayor gets to the heart of his argument. The Civil War monuments are lies. They are “a lie by omission””since the men and women who erected them (many of them civic leaders of New Orleans, by the way) don”t mention slavery. The statues were put up for “the Cult of the Lost Cause” in order to “hide the truth.”

I wouldn”t exactly call it a cult, but “Lost Cause” is Southern code. Sometimes it means the Ku Klux Klan, but in this context it usually means the United Daughters of the Confederacy, who are blamed, rightly or wrongly, for glamorizing the antebellum South. The problem with this analysis is that neither organization had anything to do with these statues. The UDC was not formed until 1894, and the second KKK not until 1915. The moonlight-and-magnolias myth didn”t exist yet in 1884.

The New Orleans statues were erected by survivors of the war long before the “Lost Cause” meme got started, in an age when public statuary was all the rage. This was true not just in the South, but in Philadelphia, New York, Boston, Cleveland”anywhere men had gone to war. The most massive Civil War monument is actually Grant’s Tomb in New York, intended as a replica of the Mausoleum at Halicarnassus, one of the original Seven Wonders of the World. It’s a magnificent structure, but if your argument is that monuments exaggerate reputations or causes and therefore need to be sledge-hammered, you”re going to have a long list of candidates for the scrap heap.

Even if we grant that the New Orleans monuments were the products of a Cult of the Lost Cause, it was an act of defiance toward Yankees, not”as the mayor would have us believe”a political screed. The civic groups that paid for the memorials were shaking their fists at the Cult of Grant and the Cult of Lincoln. All of these cults produced impressive statuary, and we should save it all. One of the most famous Civil War memorials is Augustus Saint-Gaudens” bronze relief near Boston Common depicting the Massachusetts 54th Regiment. This tribute to black soldiers was sculpted the same year as Doyle’s Robert E. Lee.

Yet the mayor goes on at some length with the claim that the New Orleans monuments were designed to foster “white supremacy,” and he even equates them with burning crosses. To prove this, he says they “were first erected over 166 years after the founding of our city and 19 years after the end of the Civil War.” I”m not sure what the 166 number has to do with anything”is he saying the Spanish and French empires are underrepresented? Is he calling for more statues of Napoleon? By emphasizing 19 years, he appears to be implying that these are not monuments of remembrance but monuments of oppression. But this is ridiculous. The South was in ruins. Nothing was built during military Reconstruction. When New York City commissioned a statue of Union general Philip Sheridan in 1936″71 years after the war!”were they trying to make a political point or intimidate the Southerners who still remembered how Sheridan pillaged the Shenandoah Valley? Of course not. The Greeks commissioned a statue to Leonidas, king of the Spartans, in 1955″2,435 years after his defeat and martyrdom at Thermopylae. If “delayed commemoration” can be accepted as evidence of bad faith and false history, then the most influential exponent of the “Lost Cause” was David O. Selznick, the Jewish mogul who produced Gone With the Wind in 1939.

Part 4: These men were rebels and should never be honored.

Yes, a Southerner actually said this: “It is self-evident that these men did not fight for the United States of America, they fought against it…. These monuments purposefully celebrate a fictional, sanitized Confederacy; ignoring the death, ignoring the enslavement, and the terror that it actually stood for.”

Yes, it’s the mayor of New Orleans who wants to rehash these old arguments about states” rights, slavery, the motives of the South, the motives of the North, the patriotism of all involved, and to do that he doesn”t even go to Shelby Foote, or Bruce Catton, or Carl Sandburg, or Samuel Eliot Morison, or Douglas Southall Freeman, or even, for God’s sake, the Ken Burns miniseries on PBS, he simply agrees with General Sherman that they”re rebels and therefore they should have hanged.

This back-and-forth about slavery vs. states” rights has been going on since before the war, so we”re not really going to settle it at a New Orleans press conference. I”ll just make two points and then let it go. The reason they were called states instead of provinces or territories is that federalism wasn”t accepted by 1861, and most people in the South”like Lee”had more loyalty to their own state than they did to the Union. A Georgian wouldn”t think of living in South Carolina. The border between Louisiana and Texas, which had recently been a nation, practically required a passport. They did fight against the idea of a united states because they regarded themselves as self-sufficient mini-nations”but so did Illinois and Maine. Many people believed that the right to secede was inherent in the original pact. Many Californians believe the same thing today.

My second point is that both sides always exaggerated the nobility of their cause. The South was embarrassed by the fact that its economy relied so totally on the ownership of human beings, and so they liked to clothe their arguments in high-minded political ideals”and elaborate statuary. The North, which had become industrialized and no longer needed slaves in 1861, forgave the states like Delaware that still used slaves, while stereotyping all Southerners as barbaric”and preserved their moral superiority in elaborate statuary.

Of course it was about slavery.

Of course it was about states” rights.

It was always about both!