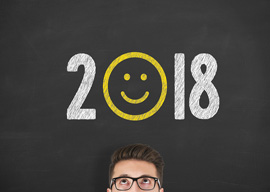 Although religious in origin, New Year’s resolutions call believer and unbeliever alike to be honest with themselves concerning the value and character of how they spent the past year. As everybody knows, we all fail consistently enough to satisfy our own standards of conduct that the annual custom of resolving to live better always finds ample material for its pangs of guilt, resolutions, and promises. In further reflection of human frailty, people are notorious for listing the ways in which they will improve themselves, only to have done with the half-hearted attempts after just a little while.

Nevertheless, it shouldn’t be overlooked or forgotten that the very existence of New Year’s resolutions attests to the natural dignity of man: the only animal, after all, who desires to make itself accountable to itself, and who therefore is pained by the endeavor’s failure. Those who feel proud as they succeed in changing themselves for the better may feel ennobled to reflect that they are engaging in an activity that is essential to greatness and without which it would not be possible; for a life, however admirable and noteworthy, always consists of a myriad of decisions that must be regularly examined by the reflective mind and conscience in order for greatness to be achieved. Nor is there any life worth living in which one does not subject oneself to a demanding sort of inquiry: Is this what I want from myself? If not, what should I do or stop doing instead?

“For the left, 2017 was a year of incessant punishment, including of one’s own self.”

Today, the problem for many people who want to live well is that the American left is awash with the illusions and obsessions of identity politics. Constantly propagated by the media, Hollywood, and the universities, these bad ideas are meant to permanently degrade us, for we are supposed to be perpetually sorry for things that are beyond our control and with which we have had nothing to do: race, gender, and the events of history. Thus, for the left, 2017 was a year of incessant punishment, including of one’s own self. Indeed, it is not going too far, perhaps, to believe that the left has become downright masochistic, because it seems to require and to be sustained by the perverse habit of condemning American history and preferring anything to what is in the nation’s best interest.

Since this practice is as unproductive as it is ignoble, it would be good for leftists to adopt the following New Year’s resolutions. Each concerns a subject on which leftists have long dwelt unnecessarily and indeed foolishly. Moving on from them would not only be wise; it would also make our national discourse a lot less wearisome.

Stop Believing America Is a Nation of White Supremacists

When Columbia professor Mark Lilla argued that his fellow liberals had gone astray in identity politics, he was predictably denounced as an apologist for racism. In a representative reaction, Katherine Franke, his colleague at Columbia, accused him of “Making White Supremacy Respectable. Again” and likened him to former Ku Klux Klan leader David Duke. Of course, it is trivially true that identity politics does not unite but rather divides. Franke, however, is a touchy ideologue, so on her interpretation (an ironic example that Lilla is right), to tell people that they should get over their respective resentments in order to find some common ground on which to move forward is nothing but an excuse for the status quo—which depends, of course, on belief in white supremacy. In reality, both Asians and Jews are more successful than whites, and furthermore, white people throughout this country are going out of their way to get women and minorities into elite colleges and “underrepresented” fields. The notion of white supremacy not only obscures this generosity (which is hardly the norm in the world); it serves as a vulgar rationale for mediocrity and ineptitude. Didn’t get the job you want? Must be owing to white supremacy! Ah, why bother in the first place?

Leftists like Franke should resolve to give up this paranoid thinking about whiteness. Besides being false, it corrupts the minds of the young—the worst thing any university teacher can do.

Whether it was renaming Civil War monuments or college buildings, this year the left’s anguish about American history became more extreme than ever. What an absurd waste of time! Although we inherit history, we are not responsible for the evils that occurred before we got here. Leftist academics and intellectuals, by wanting to revise all history to suit their own idea of “purity,” do not evince the moral sophistication on which they pride themselves deep down. On the contrary, they merely show that they are too weak for existence itself. Any symbol or reminder of “inequality,” or of slavery, or of genocide, or of whatever might cause one some sort of pain, must be purged from memory. But this anxious affair, even if successful, would not alter the fundamental character of life itself, which is necessarily competitive. For the left, the great scandal, at bottom, is simply life itself: No one can win, since that requires that some shall lose, and to lose is painful, that is, “wrong.”

The leftist would benefit from replacing this unmanly sentimentalism with the recognition that virtually all modern nations are founded on conquest, nor is the existence of slavery unique to America. History, and life itself, may not be agreeable to one’s feelings, but there is wisdom in accepting natural limits, though none at all in the delusional project of making the world “pure.”