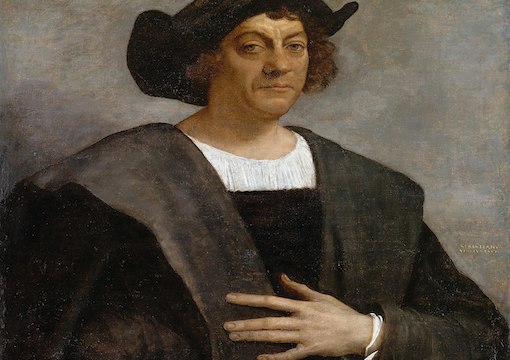 Portrait of a Man, Said to be Christopher Columbus

While in the U.S. the problems of American Indians in the 21st century have largely been ignored because extroverted blacks vacuum up most of the attention, the Great Awokening in Canada focused upon “First Nations” as its sacralized victims. Public meetings in Canada now begin with ritual incantations that “We acknowledge that we are situated on traditional land of the [insert name here] people.”

This doesn’t mean that white Canadians actually intend to give their property back to the First Nations. But it will be interesting to see how they react once it is clear that this symbolism hasn’t reduced the natives’ alcoholism and anomie.

Most likely, they will resolve to make up for their forefathers taking Canada from the Indians by letting in even more Indians from India. How that will alleviate the problems of Indians from Canada is unclear, to say the least, but that’s not the point. The point is to punish whites for having the best countries.

In reality, Canada has less to feel guilty over than most countries. In liberty-loving Whig America, the westward expansion was largely led by settlers, with the government lagging behind and only riding to the rescue when the palefaces got themselves into scrapes with the Indians (which they always did). But in orderly Tory Canada, the state was usually out front, negotiating deals with the tribes before allowing in the farmers.

In both Canada and Australia, acceptable opinion has coagulated around the theory that the plight of aboriginals today is due to long-ago humanitarian efforts to educate them in English at boarding schools. After all, what else besides the transgenerational trauma theory of epigenetics could explain why aboriginals tend to have the same problems dealing with the modern world generation after generation?

“The point is to punish whites for having the best countries.”

For example, Philip Noyce’s 2002 movie Rabbit-Proof Fence is about an evil 1930s Australian civil servant (Kenneth Branagh) who puts sisters of the “Stolen Generations” in a boarding school due to racist stereotypes that their family is tubercular, alcoholic, and abusive.

Ironically, when Noyce’s adolescent leading lady returned to her family, they turned out to be alcoholic and abusive (tuberculosis having been conquered by penicillin), so the director paid to send her to…a boarding school.

In truth, Aborigines evolved over the millennia without exposure to Old World diseases or to alcohol, so they lacked genetic defenses against them. Similarly, Scots, Swedes, and Russians have more trouble with binge-drinking than do Italians and Jews, whose ancestors were drinking wine 6,000 years ago.

Probably the least dysfunctional aboriginals in the English-speaking white countries are the hard-drinking and hard-punching Polynesian Maori of New Zealand. But then they had to have had an impressively advanced culture just to cross the Pacific to isolated New Zealand.

Importantly, residential schools were founded by progressives who believed nurture trumps nature, and thus aboriginals could be socially engineered to adapt to the modern world through education.

For example, U.S. boarding schools for Indians were invented by Union Army officer Richard Henry Pratt, an outspoken integrationist who led black Buffalo Soldiers on the frontier after the Civil War and was a leader in the Friend of the Indian movement. The Oxford English Dictionary attributes to Pratt the invention of the word “racism” in his 1902 speech against racial segregation:

Segregating any class or race of people apart from the rest of the people kills the progress of the segregated people or makes their growth very slow. Association of races and classes is necessary to destroy racism and classism.

But there’s nobody new progressives hate more than old progressives. On the other hand, America has blacks to obsess over, so Pratt isn’t as vilified here as he would be in Canada or Australia.

Thus, the sensationalized reports that there were “unmarked graves” at the much-demonized Canadian schools were immediately accepted as prima facie proof of the diabolical essence of Canadian history.

The term “unmarked graves” is suggestive of massacre, but the reality is the children died of natural causes, especially diseases that hadn’t existed in the New World before 1492 so Indians hadn’t evolved defenses against them.

Moreover, it has now been publicly admitted in at least two of the four cases that the graves weren’t actually unmarked. For example, at Cranbrook the original wooden crosses simply burned up in brush fires or deteriorated over the decades.

Whether more Indian children died due to the schools than if they had been at home is probably unknowable.

But the absurd breast-beating doesn’t mean residential schools were a good idea, either. Children simply tend to be happier living like a wild Indian than going to school. As Benjamin Franklin observed, an Indian child raised in the white man’s ways would reliably give up modern conveniences after “one Indian ramble.” In contrast, whites ransomed from Indian kidnappers often pined away for tribal life.

So, what explains the self-hating hysteria of so many whites in both America and Canada these days?

It’s easy enough to understand why nonwhites like to defame whites. The fundamental crime of the white race, for which there apparently will be no forgiveness, was pulling ahead of the rest of humanity from roughly 1400 onward.

It seems like every movie trailer in recent years ends with the promise that the heroes will “change the world…forever,” but 15th-century Europeans really did. The accomplishments of Europeans in the 1400s were perhaps the greatest turning point in history.

Brunelleschi launched the Italian Renaissance by building Western Europe’s first dome in a thousand years (to aid in which he likely invented perspective). Prince Henry the Navigator began Portugal’s eight-decade-long research and development effort to sail around Africa to the Indies. Gutenberg devised the movable-type printing press. And Columbus discovered America.

These and countless other breakthroughs over the past six centuries allowed Europeans and their overseas descendants to socially construct the most valuable real estate in the world.

This immense wealth increasingly attracts the covetous eyes of the rest of the human race, who are realizing that, crazy as it sounds, they might just be able to shame whites into allowing their wonderful property to be expropriated over the sins of their ancestors.

But why are many whites going along with such a transparent scam? What’s in it for them?

I think once you replace enough of your population, the old myths are forgotten & memorials are obliterated to demonize the old majority & justify the rise of the new rulers of a land. Wokism crystallizes during the population shift – allows the old majority to moralize their dispossession & allows them some sort of status in the new order as loyal collaborators.