No Day at the Beach 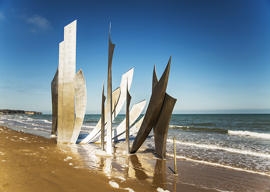 OMAHA BEACH, NORMANDY—I am standing in a German cement bunker, having walked through a large gaping hole caused by an incoming shell that must have instantly killed the handful of defenders. The bunker is on the beach, about fifty yards from the sea at high tide, and an afternoon mist is rolling in from the north. The scene is eerie, chilling, and 74 years later my heart goes out to the defenders. There are ghosts all around us. I try to put myself in the place of the very young, or very old, Wehrmacht soldiers inside the bunker facing 6,700 or so ships that have suddenly loomed in the horizon. There is no time to think as naval heavy guns unleash projectiles weighing as much as two tons, and only let up when landing boats approach. The odds are overwhelming and the defenders have been caught by surprise. They have a couple of heavy machine guns and most likely a Panzerfaust—bazooka—and limited ammunition. In no time the beach has been blasted to smithereens, and now landing boats are hitting the beach and men are charging in knee-high water. Overhead, Allied planes are attacking the German rear. There are no Luftwaffe airplanes anywhere in sight. The soon-to-be-entombed small band fire their weapons and stand their ground until their pillbox is blasted open and they fall to a man.

It might sound strange writing in Takimag from a German perspective, but fair’s fair. I asked my companions which side they’d choose, and all of them agreed that the attacking forces had a better chance to survive than the defenders. Spielberg and his ilk have shown the landing parties to be sitting ducks, but this is real history, not Hollywood bullshit. I am standing in places where long ago stood destroyed villages, torn-up fields littered with corpses and broken machines, and grounds bestrewn with one shell hole after another. I hold pictures of those hellish scenes in my hand as I stand on the very same ground where they were taken 74 years ago.

“The Wehrmacht were slaughtered by saturation bombing that would have enlightened Dante’s and Milton’s description of hell.”

We are a party of nine, all guests of Peter Livanos, the king of LNG (liquid natural gas) carriers, whose private jet has deposited us in Caen, a major Allied target and a town ferociously fought over. Our führer is James Holland, a major historian whose best-sellers include Fortress Malta, The Battle of Britain, Dam Busters, and numerous works of historical fiction. James is not only young, tall, and good-looking, he is unique insofar as he has a brother who is also a famous historian, Tom Holland, and whose book Dynasty—it opens when Rubicon ended—I was reading when Peter called and invited me to join the group: “We need at least one Wehrmacht fan for argument’s sake.” As luck would have it, they got two. Tassilo Wallentin, an Austrian friend and the best political writer in the nicest country in Europe, backed me up when the disparity of German forces in men and matériel made the fight a charge-of-the-light-brigade contest.

We were billeted in the Chateau de Sully, where the German high command enjoyed the high life until June 6. James Holland went through the first days of battle with the proverbial fine-tooth comb. His knowledge of detail and his enthusiasm had us all fired up. By the end of the first day, after the complete, total, and disastrous German intelligence failure, the Allies controlled the air and sea and most of the beaches. Seventy-six thousand Germans were opposing 150,000 British, American, and Canadian troops. Hitler, the great strategist, was still not convinced it was the real thing. Here’s Field Marshal Gerd von Rundstedt on the “Atlantic Wall” that the great strategist thought impregnable: “The Wall was a myth. Nothing in front of it, nothing behind it. Just a piece of decoration. A bluff aimed at fooling the German people more than the enemy. I told the Führer this in 1943, that we couldn’t hold out for more than 24 hours at best, but he didn’t want to hear it.”

Rommel wanted to stop the invasion on the beaches, Rundstedt inland. They argued their case to Hitler, who prevaricated. As it turned out, without air cover, the Wehrmacht were slaughtered by saturation bombing that would have enlightened Dante’s and Milton’s description of hell, a place neither had visited. We move on to Utah Beach, where Yankee Lieutenant Winters manages to take out the deadly German 88 and establish a beachhead. The German defenders are reserve troops who have not trained in combat and have been tending their Normandy gardens for years. They are told that the obstacles put in the waters in front of them—“Czech hedgehogs,” “nutcrackers,” and “Belgian Gates”—will impale the charging Americans in the sea. Some impalement. What fascinates me is the willingness of the German defenders to fight when their deaths are a certainty. Most people freeze, some run, others cry for their mother. Very few fight. I’ve seen what shrapnel does to the human body, and it’s not pretty. But fight soldiers must, and both sides fought nobly and to the death. Next week I will tell you about a very gracious act by the American First Division commander, Rommel’s decision to throw in the towel, and my falling madly in love with a waitress called Margo at the ch”teau. And a 65-minute egg.