Nobody Escapes the Progressive Inquisition 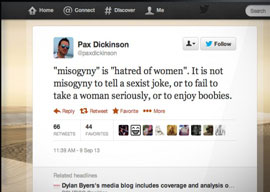 Most offensive of all was his unrelenting bro-ness. It was a trope that appeared again and again in the shrieking tirades demanding his head on a platter. Dickinson isn’t just a little bit of a New Jersey white guy, he’s an Ãber New Jersey white guy with the aviators, stubble beard, and popped collar to prove it. He’s refreshingly unashamed to be a man in an easygoing manner that would be decidedly out of place among men’s-rights activists” butthurt “alpha” posturing. I doubt he owns a single hand cream, and I”ll bet he likely snored loudly during college diversity training.

This is a man who once told me that men who don’t like sports are women. The smug look on his face is one that is common among Bad White Men of the political right with enough money and/or marketable job skills to weather any storm regarding their non-party-line quips. As such, the surprising thing is not that the Holy Progressive Inquisition turned on him, it’s that it took them as long as it did.

Pax’s defenestration was bound to happen sooner or later. Recent Tweets specifically calling out The Ministry of Hysteria’s thought-police rag for Silicon Valley put the smart money on sooner. On the upside, Dickinson was able to get over 800 new Twitter followers and, one suspects, a healthy severance package. Look for a regular column somewhere and a bright future as a lovable rascal.

No one who opposes the Progressive Inquisition is safe. Societies in decline are notoriously dangerous places to live. This is doubly true of irrational theocracies, searching for Old Scratch under every rock. In the absence of real red meat, the sharks in the tank will turn on whatever is conveniently available.

Asserting that your opinions are your own will not protect you. While the progressive left defensively (and to some degree, correctly) claims that employers are under no compulsion to employ anyone whose behavior they find odious, no one has ever been fired for being too politically correct.