None Dare Call it Prostitution 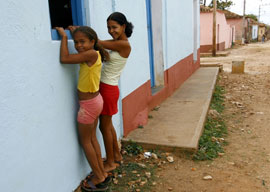 Reading recently a monograph about the lives of heroin addicts in preparation for an article about addiction I had been commissioned to write, I came across a couple of comparatively new locutions that irritate me: sex work and sex worker. What is meant by these, of course, is prostitution and prostitute. (Female heroin addicts are often prostitutes as well as addicts.) In the Anglo-Saxon world at least, there seems to be a law of the conservation of prudery: If we are not prudish about one thing, we are prudish about another, the total amount of prudery remaining constant.

Medical journals now use these locutions as a matter of course, and since English is now the sole language of medicine and science, we spread our prudery with the same self-righteousness and moral rectitude as that for which missionaries were once famous”or infamous.

The new locutions, obligatory in the polite company of the politically correct, are not only prudish but are instances of magical thinking. Those who insist upon their use think that by changing the word they will change the thing. For them, the problem with prostitution is not the phenomenon in itself and all that hitherto has inevitably surrounded it, but the stigma that attaches to it. And this, they think, can be eliminated, or at least reduced, by a change in nomenclature. For them a rose would not smell as sweet by any other name, nor would a skunk smell as bad by some other name.

Not only is the world more intractable than this supposes, but if prostitution were really no different from, say, nursing or teaching as a profession, it would not be an activity whose name the righteous reformers of the world dared not pronounce.

Indeed, there is an intellectual debate over the moral status of prostitution. In Germany there has been an attempt officially to treat it as just one way of earning a living like any other, but this has rather odd consequences, at least in a welfare state where people receive state benefits when they are unemployed. For if we really believed that prostitution were the same as hospital cleaning or serving in a shop, those who were unemployed could justifiably be forced into prostitution if an opening for a prostitute became available. There was allegedly such a case not long ago in which the social-security system demanded that an unemployed woman take up prostitution, and even if it turned out to be an urban myth the case pointed to the logical consequences of the belief that no moral reprobation attaches to prostitution: not to the prostitutes themselves, not to their customers, and not to the pimps who help bring supplier and customer together.

Does anyone actually hold this belief, not only theoretically but in his or her heart? I once shared a platform with a woman who had a doctorate in a rigorous science and decided on a career break to become a prostitute for a year to see what it was like. Apparently she enjoyed it enormously and became something of a proselytizer on prostitution’s behalf. I said that notwithstanding her happy experience of the business, I doubt that she would want her daughter to be a prostitute (I”d had quite a number of prostitutes as patients and none had wanted their daughters to follow them in their career), but she said she would be delighted if her daughter were to become a prostitute. I suspected she was lying. The problem with my attitude, she said, was that I used a numerator”the unhappy prostitutes whom I had met”without any denominator, that is to say the total number of prostitutes in the population from whom they were drawn.