Not a Nobel Man 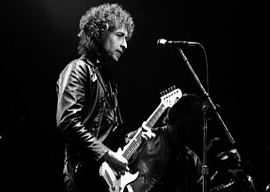 The interesting question for me, then, is why the award was greeted by much of the intelligentsia not with derision but with fawning. I think the answer can be summed up in one word: terror. The intelligentsia was terrified to be thought snobbish or, even worse, elitist, though one might have thought that the whole premise of the Nobel Prizes was elitist; and there is no doubt that Bob Dylan is (or at any rate once was) very popular.

Popularity is not in itself a bad thing, of course; but like originality, it is not an artistic virtue in itself or a guarantee of aesthetic or intellectual worth, any more than it is a guarantee of the opposite. Nevertheless, Bob Dylan’s popularity was a quality that was brought forth repeatedly in the fulsome, even obsequious, praises of the award by those who, I suspect, would not find his lines very impressive on the page. No one claimed for them any notable verbal felicity because to have done so would have been patently ridiculous. Here are some further of his immortal lines, also among the best he ever wrote:

I see a lot of people

As I make the rounds

And I hear her name here and there

As I go from town to town

And I”ve never gotten used to it

I”ve just learned to turn it off

Or else I”m getting soft

If this is the best, the worst may not easily be imagined.

I appreciate that the Prize has to be awarded to a living author and that ours is not a golden age of literature, but still there must be hundreds of thousands of authors as good as or better than Bob Dylan. I am reminded of what Dr. Johnson said when asked whether he thought that many men could have written the poems of Ossian. “Yes, sir,” he said, “many men, many women, and many children.” Maybe next year the Nobel Prize in Literature could be awarded to Hallmark Cards, the poetry within which is at least as popular as Bob Dylan’s. Or perhaps it should be the Prize for Peace, given that the sentiments of Hallmark poetry are so well-meaning and saccharine.