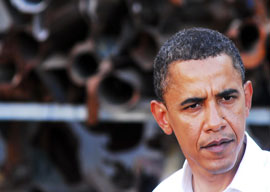 Throughout a career as community activist and several campaigns, he apparently didn’t know that numerous people and publications attributed his birthplace as Kenya.

Rev. Wright, his spiritual leader of over a decade made numerous inflammatory sermons denigrating whites and damning the United States. What was the reaction? Barry wasn’t there those Sundays.

Obama wasn’t aware about Benghazi. Hadn’t heard Americans under heavy attack were begging for relief during the firefight. Never knew rescue planes were assigned and mysteriously recalled. Where was he during all this? Who ordered the stand down? Don’t bother asking Barry, because he doesn’t know.

“I judge a man on his ideas, and Obama doesn”t seem to have any, at least not of his own conception.”

Barack was ignorant about the NSA and its Orwellian amassing of private information. It continued years while recording millions, if not billions, of emails and telephone calls. Is the NSA not a government agency? Who has oversight? Don’t ask Barry.

Hussein was unsure Osama might be a better source of intelligence alive than serving as fish food. Isn’t this Statecraft 101? Or even common sense? Wasn’t questioning the al-Qaeda chief worth the effort routinely spent to return grizzly bears to the wild? Shouldn’t this be obvious? Not to Barry!

His healthcare program was supposed to ensure that no one, especially the self-employed, would have their insurance taken away, but advisors misled the poor fellow. (Period.) Doesn’t “period” imply no conditions? Didn’t he even read his own bill? Was he lying or once again simply unsuspecting? Time and again we ask for explanations and get only excuses.

One cannot be perpetually ill-informed or uninformed on every issue of any substance for the better part of a decade without having people conclude that Barack Obama is either a colorful cut-out made to dance and shuffle for the American people down the stairs of Air Force One, or he is an idiot.

I do not believe Obama is a great orator. His speeches are lackluster, his cadence is Louisiana preacher circa 1940, and his style hackneyed. Never once have I heard the man say anything insightful or clever enough to alter my perception of anything. Those who are impressed only distinguish themselves as illiterate.

Incidentally, the Barry Stutter (by which he stumbles, repeats, and pauses over the first syllable of words) is a very old linguistic technique of quasi-hypnotists. Its purpose is to commence a phrase, use quick repetition without completion, hesitate long enough for the listener to anticipate what is to come and thereafter continue, creating positive reinforcement in the audience. Onlookers hear what they were prepared to hear moments prior yet believe they thought it first. When Barack says what he conditioned them to expect, they feel intelligent. Since he is confirming what they “already thought,” Obama is “brilliant.” Politicians and newsreaders use this trick to exhaustion.