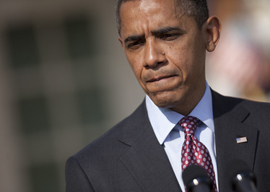 Came then the fight. Two eyewitnesses say they saw Zimmerman on his back being beaten and screaming for help.

Trayvon was found lying face down. If Zimmerman had been on top and shot him, would not Trayvon have been found on his back?

Zimmerman’s family says Trayvon started the fight with a fist to the nose, and George went down. Trayvon is not here to tell his story. But a natural question arises:

Why would Zimmerman, with a holstered gun to protect himself, close with and start a fistfight with a teenager half a head taller? A grown man with a gun his adversary does not know he has—would he not more likely stand some distance away, to pull it out if needed?

The prosecutors must have discovered new evidence to indict for murder. For all of the testimony from Zimmerman’s side and the eyewitnesses seems to create more than a reasonable doubt that he committed a murder.

Where is Obama’s political problem?

With the election on, the case has begun to divide the nation along racial lines. And Obama’s allies are doing it. It is Jesse Jackson and the Black Caucus crying that Trayvon was “hunted down like a rabid dog in the street,” that he was “murdered and martyred,” that it was a “hate crime.”

“It’s a disgrace that man (Zimmerman) hasn’t been shot yet,” says Mike Tyson. The New Black Panther Party has put out a poster offering a $10,000 reward that reads, “Wanted: Dead or Alive.”

The face on the poster is George Zimmerman.

Trayvon is the victim here, but George Zimmerman is beginning to look like a victim—of lynch law and mob rule.

With the Panthers and Tyson calling for vengeance and vigilante justice, where is Attorney General Eric Holder? Out congratulating Al Sharpton for bringing political pressure on Florida to indict.

Is this how justice is advanced in Obama’s America?

Mayor Michael Bloomberg has denounced Florida’s “Stand Your Ground” law—which may be Zimmerman’s defense—as “a license to murder” and an excuse for “vigilante justice.”

Bloomberg seems about to lead a crusade against the National Rifle Association and for repeal of stand-your-ground laws in the two dozen states that have enacted them.

Given their huge emotional investment in this case, how will black leaders and black America react if Zimmerman walks?

And how will the rest of America react to that reaction?

And if Zimmerman, Trayvon, race, guns and stand-your-ground become voting issues this fall, how good is that for Barack Obama?