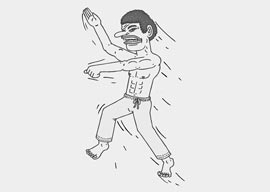 Burgarello was arrested, and his bail was set at $2 million (because an elderly man who had previously suffered a heart attack and two strokes is the most obvious of flight risks). The Reno prosecutors wasted little time on navel-gazing: They charged the old man with first-degree murder and attempted murder. Since Nevada has a “stand your ground” law, prosecutors had to prove that Burgarello acted “aggressively” to initiate the confrontation. In court, they argued that Burgarello’s act of aggression was walking into his own property. Yes, they claimed that it was an act of aggression for him to enter a vacant duplex he owned. And more than that, Burgarello had violated the Chuck Norris rule: He met a flashlight with a gun. The elderly Burgarello should have had Norris” eagle-eye vision to distinguish a black flashlight from a gun in pitch darkness, and he should have responded by using an exquisitely executed roundhouse kick to disarm the stranger, followed by a gentle karate chop to the neck.

At the beginning of 2015, both Greer and Burgarello faced the possibility of a lifetime behind bars. Had both men been sent away, a very dangerous legal precedent would have been set. Elderly people who commit the “crime” of entering their own property would have been put on notice: If you can”t defend yourself proportionally, if you can”t execute nonlethal martial-arts maneuvers like Chuck Norris, then lie down and take whatever the bad guys have in store for you. Maybe the villains will take your life, as Greer’s violent, repeat-offender opponents surely would have, or maybe they”ll scatter like rats, as Burgarello’s startled junkies probably would have. But regardless, if you don”t give them the chance to take your life away, the state will take it away for them.

It took the jury in Reno all of six hours to find Burgarello not guilty on all charges, including the lesser ones they had the option of considering (including second-degree murder and involuntary manslaughter). And in the Greer case, the DA decided not to file charges at all, stating in a press release:

Thomas Greer is presumed to have held a reasonable fear of imminent peril of death or great bodily injury…. This presumption coupled with a careful review of the evidence presented makes it clear that Thomas Greer exercised his legal and legitimate right of self defense when he shot and killed Andrea Miller. No criminal liability arises from his actions.

A victory for elderly white dudes, and a devastating loss for junkies, thugs, Ruben Navarrette, and the Chuck Norris rule. In a year filled with bad news, the fact that Tom Greer and Wayne Burgarello are closing 2015 as free men is indeed a reason to give thanks.