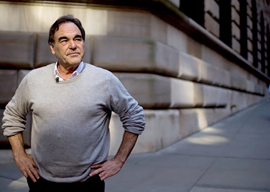 Yet even the most desperate advertising copywriter wouldn”t adorn a movie ad with the quote “Informative and Reasonable!” in 72-point type. And if Oliver Stone won”t indulge in malicious speculation about Wall Street, to whom can we turn?

The new Wall Street features numerous inside jokes, such as a cameo by Charlie Sheen as Bud Fox from the original. The funniest, though, is overlooked in the credits: The screenplay is by Allan Loeb and Stephen Schiff. That’s like a movie about heavy industry being written by Adam Carnegie and Stuart Rockefeller. In 1867, Solomon Loeb co-founded the genteel investment bank Kuhn, Loeb & Co., which he passed on to his son-in-law Jacob Schiff, who became the early 20th Century’s German-Jewish J.P. Morgan.

Loeb and Schiff’s script is overstuffed with plot, exposition, and commentary. Stone compounds this by letting everybody except poor Shia LaBeouf, the nice-guy nullity at the center, overact. The youngest and oldest performers are particularly shameless. As Gekko’s estranged daughter, Carey Mulligan (Oscar-nominated last year for An Education) shows off facial-muscle agility that would intimidate Jim Carrey. After a while, I stopped listening to her lines and tried mimicking her expressions in the dark. (I couldn”t.) Eli Wallach, age 94, has a blast stealing scenes as the only man on Wall Street old enough to remember the first Black October. He gleefully informs the Treasury Secretary: “It’s 1929 all over again; it’s the end of the world!”

Money Never Sleeps continues Stone’s practice of middlebrow free association, as if he were perusing Wikipedia on acid. Just as Gordon “Greed Is Good” Gekko’s name is a mashup of the lizard and Gordon Getty, once the richest man on the Forbes 400, Josh Brolin’s handsome villain is called “Bretton James,” an apparent concoction of Jamie Dimon of JPMorgan Chase & Co. and 1944’s Bretton Woods trade conference. Similarly, Stone casts Austin Pendleton in a supporting role as the inventor of green nuclear fusion energy because he’s a dead ringer for the late television astrophysicist Carl Sagan, so you can tell right away that he’s smart about the science stuff.

These subliminal shortcuts help Stone rush us through a huge amount of material in 135 minutes without the wheels ever coming off, but an older and wiser Stone isn”t a better one.