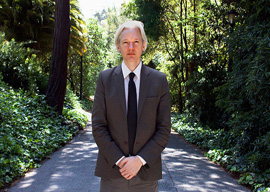 I understand why the Pentagon, the State Department, and the White House hate Assange and WikiLeaks. He broke into their cozy little circle of lies and turned on the lights. We”ve seen the amusement of helicopter pilots and gunners as they blew away journalists in Iraq. We”ve read how Hillary Clinton illegally suborned UN diplomats to spy on their colleagues. We”ve had a look into secret discussions where the US tried to persuade the Japanese to shut down the anti-whaling Sea Shepherd Conservation Society. We have read that Israeli border guards have been trying to shake down American companies such as Coca-Cola, Procter & Gamble, and Westinghouse for bribes to let them send their products into the Gaza Strip.

We have seen all of this, while Assange’s critics tell us (1) nothing he has revealed is of any significance and (2) what he has revealed is so significant he must be prosecuted or terminated with prejudice. Let the government fight its corner, fair enough. But does the press, which collaborated with WikiLeaks in bringing so much information to public scrutiny, need to condemn him? In the battle between the state and the free press, I stand with the free press.

This is an easy decision, and I made it well before I met Assange last weekend. He seemed to me to be neither arrogant nor deceptive. He is, however, single-minded and determined to fight for his corner. He has accepted his predicament with good grace, having endured nine days in Wandsworth Prison in solitary confinement. The terms of his bail, while he awaits a possible extradition to Sweden for alleged crimes that carry no sentence other than a small fine, require him to remain inside the Norfolk farmhouse of his friend Vaughan Smith, a brave former Grenadier Guards officer and combat cameraman. Julian may leave the house only for daily visits to the local police station. When we wanted to smoke outside, in deference to Pranvera Smith’s understandable concern about the air around her beautiful little daughters being fouled by tobacco, Julian had to stand inside the doorway. I was free to pace the garden with my cigar, the absurdity of which was obvious to us both.

He spends most of his time working on WikiLeaks and preparing his legal defense, showing no sign of the tension that would break most of us. But making this a battle about his personality misses the point: The issue is freedom to publish information without fear of intimidation, imprisonment, and death. Where are my colleagues? Many have stood up honorably to defend him and to guarantee his bail in Britain. Others have turned on him, including the two English-language newspapers (The Guardian in London and The New York Times) that published documents they could have obtained only from him. It was ever thus, as Julien Benda reminded us in La Trahison des Clercs:

Our age has seen priests of the mind teaching that gregarious[ness] is the praiseworthy form of thought, and that independent thought is contemptible. It is moreover certain that the group which desires to be strong has no use for a man who claims to think for himself.

During America’s war in Vietnam, Noam Chomsky referred to the journalistic and academic defenders of the aggression as the “secular priesthood.” Their heirs worship at the same altar of power, even when it means sending one of their own to prison for a “crime” they only pretend to commit: speaking truth to and about power.