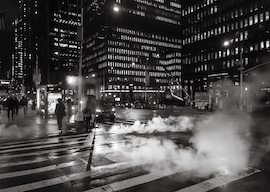 NEW YORK—This place feels funny, a bit like Beirut, where Christians, Muslims, Druze, and encamped Palestinians live together but separately, with one or two million Syrian refugees completing the mix. Over here the once-ruling WASPs are dead and buried, having moved to their country clubs in the suburbs and irrelevance. The Jews are in like Flynn, ruling Wall Street, the real estate market, and the television networks. The Chinese are creeping up, having bought more real estate in Manhattan alone than ISIS has lost in Syria and Iraq. (I now get nuisance telephone calls in Chinese.) On the bottom of the ladder are the Hispanics and the African-Americans, the former doing all the heavy lifting in the construction business, the latter, sadly, being the majority in city jails. The Koreans are sort of hunky-dory, working 25 hours per day and then some, but their Stakhanovite work habits do not include language skills.

Still, like in Beirut, there is a malaise about the place, with an enveloping fog of uneasiness, the city no longer a melting pot but a tense landscape seething with frustrated hopes and dreams. The only happy people I see are Midwestern tourists gaping openmouthed up at the sky, and people with ten-gallon hats from Texas, New Mexico, and Arizona. When I was young there was Germantown uptown, and Chinatown downtown, and Little Italy in between, and Hell’s Kitchen where the Irish were on the West Side. But everyone mixed fine, and the gangsters who were uptown and in the Bronx killed each other and never us. And there was Harlem and the Cotton Club and Spanish Harlem, too, crime scenes in the past, now residential boroughs with even some yuppies thrown in for good measure. So, what makes with all the angst?

Why do so many feel like strangers in a strange town? Many New Yorkers have cut themselves loose from the ties that bind them to the customs of their parents and the people around them. Others have become trolling sociopaths whose frustrations one can see on their faces and in their body language. The latest manifestation of this malaise is men—either Hispanic or African-American—openly masturbating in crowded subway trains. Thirty-nine of these onanists have been identified, photographed, and publicly shamed but only two arrested and then immediately freed. Mayor de Blasio is the worst, or second-worst ever, spending like mad without results and with the murder rate going up daily.

“Feelings of personal powerlessness and a sense of futility make for a strange-looking bunch of Big Bagelites.”

The great sociologist professor Taki claims that all this angst derives from the fact that many New Yorkers are confused as far as their role in modern society is concerned. Globalism, multiculturalism, and socialism have done the trick: destabilized traditional family values with all these new mores like same-sex marriage, gender-neutral bathrooms, and prepubescent transgender rights. But basically people feel mocked and set aside by the elite who run this town, those in City Hall, the media, and the hatchet-faced women of glossy magazines. Pseudo-lefty-trendy magazines like The New Yorker fail to address the fact that Hispanic, Chinese, Korean, even African-American societies are conservative by nature. These phonies pretend to speak for the underdog, but converse only with each other.

Otherwise, always according to the good professor, New Yorkers attached too much importance to dreams that were destined not to be, the American dream and all that. My friend Mark Brennan has just written a brilliant piece in Chronicles about his Mexican maid, and how she escaped her country for the land of plenty and is now scared to death that after forty years of hard work her daughter might be slaughtered by illegal-immigrant gangs that are running wild on Long Island. The trendy media types ignore the gangs and their victims because their archenemy, Trump, has made it part of his campaign to get rid of them. Feelings of personal powerlessness and a sense of futility make for a strange-looking bunch of Big Bagelites.

And yet, the U.S. has more rich folk than any other country, including China, which leads the world in billionaires. There are more rich people in America than the total population of Greece and Portugal. Just think, 12 million households in the United States have a net worth of more than $1 million. Three percent of Americans are millionaires; 250,000 became millionaires only last year. Yet there’s a wealth of evidence that earnings don’t produce happiness. Some say yes, others without it say no.

My oldest wrestling teammate in school, Anthony Maltese, was undefeated and among the best-ever wrestlers in the country. We’ve been close friends for 65 years and Tony, a very rich man, is as generous as they come. He and his wife endured the worst fate ever—they lost a son in his athletic prime to cancer—yet they have never passed their grief over to friends. They remain cheerful and helpful to everyone, and Tony finds reasons to send me gifts nonstop just because we were on the same team so long ago. The point I’m trying to make is, intelligent people can overcome any disaster, especially if they have religious faith. New Yorkers are in trouble because the phonies they listen to on TV and the scribblers they read are agnostic lefties who know as much about the common workingman as I do about advanced algebra. Start reading conservative stuff and happiness will follow. Yippee!