One Grey Lady Fires Another 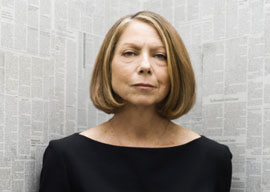 Observers seem determined to imbue Abramson’s dismissal with Some Kind of Meaning. Like everything else of alleged import that occurs within the liberal universe, this cosmically trivial event must surely be Symbolic of Something Else, some despicable (and probably imaginary) systemic cardinal sin of world-historic proportions. In this case, Abrahamson was let go because patriarchy, as the kids say these days.

I hate to say it, but maybe they”re onto something, for once. Staffer Dean Baquet reportedly threw “a temper tantrum after one meeting with Abramson. Upon leaving her office he “slammed his hand against a wall and stormed out of the newsroom.””  That’s the sort of behavior that can get you escorted out of the building by security, carrying the contents of your desk in a brown banker’s box.

Except at The New York Times. Abramson’s old job went to Dean Baquet.

I”ve been relying on veteran media-watcher Ed Driscoll to render the Abramson saga, if not understandable or even meaningful, at the very least entertaining to those of us who enjoy watching the liberal elites try to swallow, and keep down, their own “identity politics” excrescence.

Driscoll has been helpfully dredging up some of The Times“ many intramural sins, both venal and mortal, painting an unflattering portrait of the paper’s weird corporate culture. If Abramson’s “management style” was a firing offense, can we talk about that time “Pinch” Sulzberger brought a stuffed moose to an all-hands staff meeting?

Driscoll also reminded me that, in the year and a half after a neighboring building of some import had been reduced to a smoldering crater, the brave crusading male feminists at The New York Times ran “nearly 100 stories,” many of them on Page One, courageously denouncing the Augusta National Golf Club’s “sexist” refusal to permit women to become members. (“Good DAY, sir!”)

“In my house growing up, The Times substituted for religion,” Abramson said right after her promotion not three years ago. Of course, since that quote appeared in The New York Times itself, I”m hesitant to believe it is accurate. What Abramson believes now, I couldn”t say.