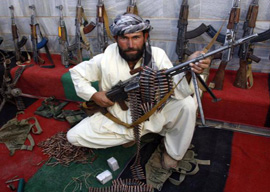 “I believe the decisions that the president will make for the next stage of the Afghanistan campaign will be among the most important of his presidency, so it is important that we take our time to do all we can to get this right,” Defense Secretary Robert Gates said two years ago. What will his successor say two years from now?

All options are, as in Gates’s 2009 review, on an increasingly rickety table”all, that is, except immediate withdrawal. President Obama and his soon-to-be CIA director, General David Petraeus, are considering reducing troop numbers to what they were before the last surge. By removing some of the targets for Taliban attacks, that should reduce the US casualties. However, it would not reduce them as much as if they all left. Without American troops, though, the Karzai government would fall. So what? Will you send your son or daughter to die for Hamid Karzai and his Gucci coat? With Karzai gone, the Taliban would take over”up to a point. They would dominate in the Pashtun areas from which they came and where they dominate anyway. The old Northern Alliance forces would hold their regions and opium fields as they did before the US swept them into Kabul. Those Uzbeks, Tajiks, and Hazaras are unlikely to cede territory to the Pashtuns. If Karzai and his brother escape with their lives and fortunes, Kabul would remain a nominal capital with no more sway in most of the country than it has now. All that the US can ask is that no faction provides bases and support to a post-Osama al-Qaeda, a desire it can enforce from bases over the border using special operations and economic leverage.

Why don”t the Army and Marine Corps make a case, as many of their veterans have (notably in Veterans for Common Sense), for a withdrawal that would save them lives, money, and prestige while allowing them to concentrate on their constitutional duty to defend the republic?

For the answer, I turn to another great George. George Sanders may not have been a saint, but he was Hollywood’s English gentleman cad par excellence. Known to a generation as the sibilant voice of Shere Khan in Disney’s 1967 version of The Jungle Book, Sanders played the leader of the Philistines in Cecil B. DeMille’s 1949 classic Samson and Delilah. To his oft-demoralized military commander, Henry Wilcoxon, the great Sanders says, “Like all soldiers, when you fail by the sword, you ask for more swords.”