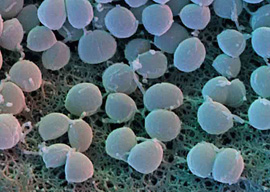 Honesty would be too costly. Honestly reporting even one honest mistake could permanently ruin a medical career. It’s not worth the lawsuits; better to force them to prove their case than to hang yourself with your own words. A 2002 New England Journal of Medicine study revealed that only 14 percent of physicians favored making hospital errors public, whereas 63 percent of the public supported the idea.

Obviously, Big Medicine and the Little Public have different interests at stake here. And as usual, Big Government has no one’s interests in mind but its own.

As the saying goes, I have some “skin in the game” here, too. I first heard of MRSA in 2008 after my sister-in-law had a melon ball’s worth of flesh scooped out of her back to prevent the killer bacteria from spreading. Her friends had dropped off their 12-year-old daughter for babysitting and, knowing it was MRSA, told her that the pus-oozing sore was actually a spider bite. She cleaned off the “spider bite” and wound up in ICU about a week later. Since she was uninsured, the whole episode cost her $100K, a couple of “friends,” and a melon ball’s worth of flesh.

A friend of mine contracted MRSA in 2008 after a brief hospital stay. They took one barefoot shower in their private hospital room, and a week later they had boilingly painful open sores under one foot that only subsided after a month of unceasing pain and three-times-daily medication.

That same year, I spent eight days being shuffled around between three Atlanta-area hospitals, a dozen or so doctors, and countless more germ-coated hospital scrubs—eight days during which my skull was sawed open, my veins stabbed with IV drips, my dick catheterized, my throat intubated, and various medications pumped into my every hole, vein, pore, and artery. As far as I know, I did not acquire any fatal infections during that stay, and I’m a little scared to get tested.

But during a follow-up visit, the nurse at check-in insisted that my name was actually John Goad and that I was four years older than I am. Turns out there was another patient by that name and age at the same hospital. It took a solid fifteen minutes’ worth of convincing her through words, personal identification, and increasingly theatrical sign language that I was who I said I was. If there had been one small oversight on her part, I could have received the wrong pills—or the wrong surgery—and died.

Would it be rude to suggest that some of the money spent on foreign wars and banker bailouts would be put to better use on a couple hundred million scrub brushes, buckets, disinfectant bottles, and a few thousand workers who are at least literate enough to know the difference between “John” and “Jim”?

Until the Powers That Be sort it all out—which will be “never”—it’s wise to take some personal precautions: