Nowadays, “art” is a rather broad concept, whereby almost anything is considered art so long as someone considers it art. While some of the more famous living artists are certainly talented, their work often seems more inspired by the puerile desire to shock, and earn a quick buck, than the higher creative impulses. And for those who have apprehensions when it comes to appreciating and valuing contemporary art, the alternative has been waiting in the wings for quite some time now…

Though some would call it unrefined, “outsider art,” as it is commonly known, is marginal, free, and the precious result of unbridled imagination. Indeed, it is raw, original, and quite often produced by mad men (and women.)

The big back-to-school buzz in London is about the Museum of Everything, dedicated exclusively to outsider art. The museum opens in mid-October, in conjunction with the Frieze Art Fair. The labyrinthine space is housed in an old dairy, which later became a well-known recording studio in Primrose Hill. The museum is the brainchild of one James Brett, an eccentric and creative fellow whose vision for the museum was inspired by William Brett (no relation), who has a quirky museum with the same name on the Isle of Wight. (Outsider arts can also be found at an annual fair in New York or at Intuit: The Center for Intuitive and Outsider Art in Chicago. A handful of other museums dedicated to the work can be found in Germany, Denmark, Switzerland, America, and Ireland.)

During the early 20th century, the work of insane-asylum patients gained attention after a Dr. Hans Prinzhorn published Bildnerei der Geisteskranken (“Artistry of the Mentally Ill”) in 1922. French artist Jean Dubuffet also began collecting what he termed art brut in the 1940s, an assemblage now permanently housed in a museum in Lausanne. In 1948, Dubuffet formed the Compagnie de l”Art Brut with other artists including the father of Surrealism, Andre Breton. His interest in outsider art was predicated on the purity, and possible superiority, of creativity unaffected by mainstream cultural influences.  This proposition eventually gained momentum, much as the Surrealist and Dadaist movements had arisen out of a rebellion against the establishment and a search for non-“normal” authenticity.

Since the initial interest in art brut, outsider art has achieved cult status, and a handful of offshoots have surfaced. Under the “outsider” umbrella, folk art, naÃ¯ve art, intuitive art, and visionary environments have emerged to define works that stand apart from the ordinary. In an ironic twist, outsider art is in fact accessible to everyone, and most people have participated in it in one way or another.

And so one wonders, what is outsider art exactly? Who makes it? And where can one see it? Well, outsider art comes in a multitude of mediums, and can be anything from a roadside rock and sculpture garden to an unconventionally decorated house to an indigenous craft. All types of people produce the work. Many are mediums, others mystics, prisoners, dreamers, visionaries, and lonely eccentrics.

Probably the most famous outsider artist is Henry Darger, an orphan and a recluse who was institutionalized as a child. In his Chicago apartment, Darger produced 15,000 pages of text, and hundreds of large-scale illustrations, maps, collages, and watercolors portraying his childhood idols, “the Vivian Girls.” They appear in battle scenes amid monsters and nature. The work has a naÃ¯ve quality, though Darger was clearly a great talent. 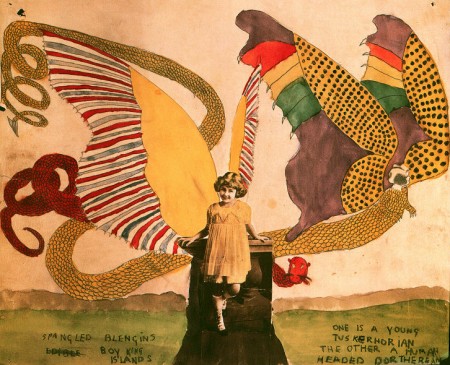 Spangled Blengins, Boy King Islands. One is a young Tuskorhorian, the other a human headed Dortherean, by Henry Darger

Nek Chand, another well-known outsider, is famous for his forty-acre rock garden in Chandigar, India. Others include Kiyoshi Yamishita, a Japanese wanderer and graphic artist who was likely an autistic savant, and Madge Gill, an English medium who created thousands of drawings guided by a spirit she called “Myrninerest.” George Widener, an outsider with Asperger Syndrome, makes spectacular floating pieces out of numbers and burnt paper. Oftentimes, the work is only discovered after the artist’s death.

Brett finds this work dynamic because it exists “in every country, in all price ranges and from an array of wonderful creators.” For him it is not “outsider art” but “insider art,” “because it reflects the private interiors of the artists who create it.” Brett also hopes to invite individuals from around the world to show their collections. Among the supporters and individuals associated with the museum are: Ed Ruscha, Eva Rothschild, Lee Friedlander, Hans Ulrich Olbrist, Paul Noble, and Annette Messager.