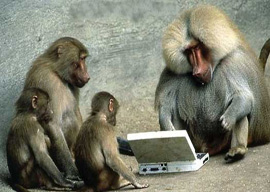 It’s like the old General Motors notion of “planned obsolescence,” only for people rather than cars. And the H-1B program, made up overwhelming [sic] of young workers, is what fuels all this. In pre-H-1B days, it was assumed that engineers and programmers would learn new technological skills on their own, as part of their jobs; now, they often are not given that chance.

Software firms are trading in their 35-year-olds for 25-year-olds as if they were aging matinée idols. There’s considerable overlap here with the classic essay “Why a career in computer programming sucks” by the blogger who calls himself Half Sigma:

(It may have occurred to you by this point that laying off your 35-year-old employees so you can bring in lots of 25-year-old foreigners—who in turn you will lay off after ten years—is storing up some nasty social problems for the future. But whatever future lies beyond the next election cycle is of zero interest to any important person in any of the federal government’s three branches, so the band plays on.)

I write about this topic with mixed feelings, as I was once an H-1B guest worker myself. This was in 1985, when Wall Street was booming under deregulation. All the investment firms were computerizing their trading and back-room operations like crazy, and computer programmers were being sucked in from all over.

That was my line of work at the time. Being single and carefree, I worked on contract—six months here, a year there—through an agency in London, where I lived. One day my agent called to ask: “You wanna work in New York?” I responded with the important question (“How much?”) and then, satisfied with the answer, agreed. “The firm will get you visas and stuff,” the agent assured me. “Don’t worry about a thing. Oh, there’s an interview.”

I went to the interview at a London hotel. It was routine, just checking my skills. There was only one off-the-wall question: Was I OK about working for Americans? My contract at the time had been with Marathon Oil, a US firm headquartered in Findlay, Ohio. They had an operation in the North Sea, serviced by a London office. All my bosses were American, I told the interviewer smugly.

I asked him an off-the-wall question in return: Did it bother them that I was forty years old? He looked puzzled. No, why should it, so long as I had the skills?

Within a month I was installed in a cube at Five World Trade Center, an H-1B stamp securely in my passport. Nobody had been fired to make room for me. Reagan was in the White House, Maggie Thatcher was in Downing Street, the USSR was tottering, India and China were struggling out from under the rotting hulks of, respectively, state socialism and Maoist lunacy, Major Medical was the merest notch on one’s paycheck, and young female office workers were wearing sneakers for their commute. There were jobs aplenty everywhere for 40-year-old software grunts. Ah, those were the days!