Palin Gets Ripped Off, Sheen Sues & Timberlake’s on the Prowl 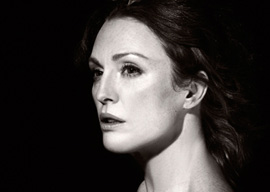 Boy, is this casting move going to pack theaters across the country: Julianne Moore has signed on to play Sarah Palin in an adaptation of the runaway bestseller Game Change which covered the 2008 election. Luckily, the siren is Tina Fey-approved. “If she needs my wig, I have it,” said Fey. Palin said she’s glad imitations of her give some “gals” job security. She forgot to say if they really wanted to imitate her they”d have quit by now.

Jessica Biel and Justin Timberlake are no longer in synch (har har). The couple broke up after being together since 2007. Months ago rumors were swirling that Timberlake hooked up with geek crush Olivia Munn, yet that doesn”t appear to be the cause of the break-up. They still “love and respect” one another. Give it time, folks. Takes a little while for bitterness to boil over.

Or perhaps, as in the case of Ryan Reynolds, there will be no bitterness! Only joyful snuggling in public with a new, younger blond. ScarJo’s moved on to the bedraggled yet still apparently devastating Sean Penn, and Reynolds is hooking up with Agnes Fisher, a German model hanging around the set of his new movie filming in South Africa. She supposedly turned 25 this Friday. Mazel tov, rebound girl! Enjoy your moment in the sun. 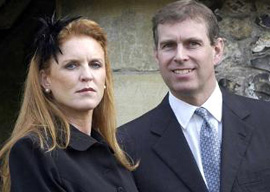 Despite divorcing long ago, Prince Andrew and Fergie still share a number of habits, including godawful decision-making skills. The Duke of York’s been spotted lately with billionaire businessman and convicted pedophile Jeffrey Epstein. Nothing like the scum of the earth to dirty up the ol” royal family, eh? A royal source says Queen Elizabeth II met with the prince to discuss his ill-advised friendship and many want the prince to relinquish his duties as trade envoy. Epstein spent 18 months in jail for soliciting a minor for prostitution.

And if that wasn”t awful enough, Sarah Chatterbox Ferguson has leapt to her ex-husband’s defense and apologized for allowing Epstein to pay back some of her debts, saying she never should have accepted his cash (around $25,000). Fergie was trying to be noble, yet included this one telling details: the deal was arranged through Prince Andrew’s office. Sure he was glad to get that shout-out.