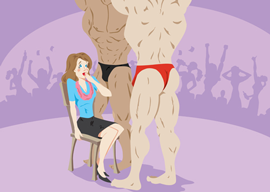 Admittedly, because of the title, I myself was hoping for more political analysis than the text delivered. The false dichotomy that Liberal from the Waist Down implied was fascinating: indeed, is there anyone alive, who’s honest with himself and intellectually active, who completely agrees with any belief system wholesale”who’s sold on the logic of every letter in the party line, with no cognitive dissonance? The idea of a person exploring that friction, where his general political orientation hits the rough spots where he can”t quite go along with the “team,” was … unrealistic.

I didn”t pay enough attention to Thomas’s marketing tag. He bills the book as “pleasure reading for conservatives.”

These are stories meant to entertain, from a little-heard point of view, without much of a care for the strictures of the day. As Thomas puts it, Tyler is “socially liberal but fiscally conservative”which I think most people are.”

And as entertainment, it delivers nicely”depending on what kind of conservative you are. If the irony of a straight guy stripping in a gay club while hitting on lesbians is more disgusting than amusing to you, this isn”t your pleasure reading. If you enjoy stories about men being ladies” men with no apologies, this is a gold mine.

Tyler is an opportunist when it comes to women, sure, but he’s also a gentleman who admirably restrains his frustration with double standards. Female strippers make more money while flaking out more often; what’s more, no one’s allowed to touch them, whereas female and gay clients alike think they have a perfect right to pinch, poke, and quite forcefully smack any part of a male stripper’s anatomy they can reach. A few gay clients gave Tyler the finger after being told to go easy, and one lady threatened to begin crying.

But at the end of the day Tyler knows he’s lived an enviable life for a high-testosterone perfection freak, and he even manages to be a bit of a romantic. In an industry full of cheats and liars, his attempts at honesty and honor are strangely touching.