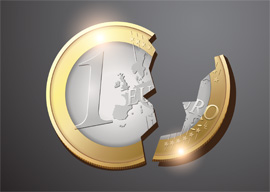 This is not the case with Greece, which runs up increasing annual government debt. The Greek case may be the straw that is breaking the camel’s back. For unlike the debts owed by another country with a declining economy”namely Spain, which is feeling a real-estate bubble’s effects”Greece is saddled with growing public debt. The loans it has received from the European Central Bank in violation of the established rules have made matters worse. The Greek government has taken gigantic loans in billions of euros (much of which has come from Merkel’s government) but has adamantly refused to submit to the fiscal discipline the Central Bank has tried to impose.

Sarrazin does not call for the eurozone’s immediate dissolution, although he says he would be delighted if his country could return to the Deutsche Mark, which he celebrates as perhaps postwar Germany’s greatest economic achievement. He also favors pushing the weak sisters out of the eurozone as fast as circumstances permit. His ideal partner for a monetary union is Estonia, a Baltic country with slightly over a million people which has flourished by adhering to the Maastricht rules. Sarrazin is not sufficiently bothered by PC to avoid bringing up the cultural habits that have allowed Estonia and other Baltic states to prosper after decades of grim Soviet oppression.

The Atlantic says Sarrazin is trying to divert attention from German guilt for Nazi crimes by complaining about his government being “blackmailed” into ponying up bad loans. Having read the entire work, I can find only two and a half sentences that bear any relation to The Atlantic‘s wild charge: one where Sarrazin speaks about Merkel’s feeling blackmailed, and another passage suggesting that the German Greens have no desire to let their countrymen run their own affairs.

There isn”t the slightest trace of German patriotic feeling in Sarrazin’s work. The author is a technocrat who spent most of his career in a leftist party and who would not be opposed to seeing Germany disappear into a properly run European administration.

Sarrazin clearly notices how Germany’s preoccupation with overcoming the past has pushed it toward questionable economic decisions. Meanwhile the British media’s attempts to embarrass the Germans into making further bad loans are despicable. Although the British wisely avoided joining the eurozone, their journalists and leaders are trying to push Germany into “bailing out” Greece once again. The Economist and its devotees may believe this will help British trade and that the Germans owe them something because they benefited immensely by abandoning the Deutsche Mark (a contention that Sarrazin proves is not true). We also have the spectacle of the German Chancellor and Finance Minister trying to show the world they”re “good Germans” by throwing good money after bad. But such tactics merely delay the inevitable. In this case what’s inevitable is for the delinquent nations to declare bankruptcy and then return to their national currencies.