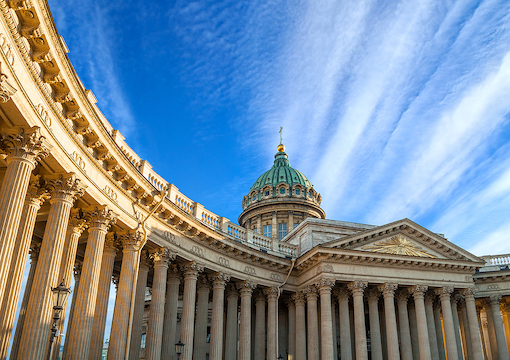 Five months ago, Washington was sure that their cancel campaign against the Russians would end in their favor. After all, they control access to the West and not just in the economic sense. The Global American Empire controls access to the modern consumer culture and everyone is desperate to be a part of it. How could the Russians possibly survive being excluded from Western mass culture?

The West has been shocked by the answer. Not only have the economic sanctions been a complete failure, but the Russians seem to be taking pleasure in their decoupling from the West. At the just-concluded St. Petersburg Economic Forum, a confident Vladimir Putin said, “Russia has regained its sovereignty and will not give it back to anyone. The break with the West is irreversible and final.”

“What Putin is telling the West is that Russia is now prepared to be itself again.”

This is not the first time the Russians have faced this issue. Into the Middle Ages, what we think of as Russia was a vast land of various people. From the 10th century into the 17th century, the area was ruled by a noble class, the boyars, above whom was a tsar, who operated a rigid feudal system. While Europe was slowly evolving toward what we think of a Western society, Russia was locked into an alien social system.

Peter the Great changed this by forcing reforms on the lands controlled by what would come to be known as the Russian Empire. Peter saw that Russia was backward compared with the West, not just economically but culturally. Borrowing heavily from what he observed in Western Europe, he instituted a set of reforms aimed not only at modernizing Russia but westernizing it as well.

After Peter, Russia was ruled by a series of tsars who continued to modernize and westernize the Russian Empire. As is always the case with personal rule, some tsars were better than others. Those old cultural habits never fully went away, as they had deep roots in the land and the people. Western culture was an uneasy fit for Russia, largely dependent upon the vigor and competence of the tsar.

By the 19th century it was becoming clear that the tsarist system was not holding up to the great changes sweeping Europe. The Russian Empire played a key role in defeating Napoleon and as a result was a major European political power. This concealed a growing reality in Russia. The tsarist system kept Russia isolated and backward both economically and socially, compared with the rest of Europe.

Ironically, it was the victory of Napoleon that sowed the seeds for what a century later would be the end of the Russian Empire. Young Russian officers during the Napoleonic wars came in contact with Western liberalism. They brought those ideas back with them, and soon social/political unrest was a feature of Russia. Combined with the economic reality of industrialization, it made for an increasingly unstable system.

Like the French Revolution, the Bolshevik revolution remains a topic of interest mostly for what it triggered in the West. From the perspective of the East, it can be seen as part of a pattern that started under Peter the Great: Contact with Europe reveals Russian cultural and material backwardness; this sets off a chaotic reform period, followed by a stabilizing conservative period.

The result is a temporary closing of the gap between Russia and the West, but the gap never fully closes. Those deep cultural differences always leave Russia on a different path from the rest of Europe. The Bolshevik revolution was supposed to lead the world into the communist future. Instead, that old pattern remained and the result was a Russia that was even more isolated from the West.

In a way, the last three centuries of Russian history can be viewed as a long experiment in cultural appropriation. From Peter the Great to the post–Cold War period, Russia has been defined by efforts to adopt uniquely Western political, economic, and cultural ways. In periods with a strong and dynamic leader, these reforms were superficially successful. In other times, these adopted ways looked alien and inappropriate.

What we may be seeing with the war in Ukraine and the conflict with the Global American Empire is an end to the cycle started by Peter the Great. It is appropriate that Putin would use the city that has come to symbolize the Russia of its namesake to tell the world that the days of Russia aping the West are over. What Putin is telling the West is that Russia is now prepared to be itself again.

If you have been following Putin since his rise to power, a recurring theme is the idea of Russia as a partner to Europe, a part of the history and culture, but also outside of Europe historically and culturally. Further, as the leading people of Eurasia, Russia has a unique set of duties and obligations to Eurasian civilization. The primary duty is the defense and preservation of the people and culture of Eurasia.

This is the heart of the conflict with the West. American provincialism combined with European chauvinism has produced a Western culture that is a blend of egalitarian utopianism and totalitarian consumerism. The collective West is ignorant of and at war with the great diversity of humanity. So much so that no Western leaders can consider an alternative to Western liberal democracy.

In another bit of proof that the universe has a sense of humor, the America leading the charge against Russia in the name of the West is plagued by the same inferiority complex that has plagued Russia for three centuries. America has a unique history and people, placing it outside of Europe, but it is driven by a desire to be part of Europe and, most important, accepted by Europe.

At the sunset of the West, the war in Ukraine captures the new political and cultural reality that will shape the 21st century. At one end is the Global American Empire, tied to the old ideas of the last century. At the other end is Russia, accepting the reality of this new age. In between is a Europe that is being forced to come to terms with the reality that it is a spent civilizational force.

It is not all bad news for the West. Perhaps the Russian refusal to fight with a receding American empire over the corpse of Europe will trigger an awakening. America cannot return to normalcy until it gives up its imperial dreams and, most important, accepts its status outside of Europe. Like Russians, Americans must begin to see themselves as the leading people of a unique civilization outside of Europe.

It is too soon to know if present events will shake the ruling classes of the West out of their trance. Similarly, it is too soon to know if Vladimir Putin will be the bookend to Peter the Great in the long process of Russian self-discovery. A century ago, events in Russia cast a shadow over the West. Today, events in Russia are closing the books on the 20th century and perhaps giving the West a final chance to save itself.