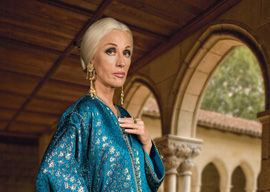 Cindy Sherman at the MoMA

Houellebecq usually appears in his books through his detached and disillusioned heroes. In The Map and The Territory he is there in person”Michel Houellebecq, author”reading Tocqueville in Ireland before being brutally murdered in a France that has become a theme-park version of itself.

As his own character, Houellebecq focuses on his flaws. As her own model, Sherman treats her beauty as an accessory without making the beginner’s mistake of falling into an ugliness as easy as prettiness can be. Her constant self-portraits are less self-indulgent than his self-flagellation; where she manages to take pictures without making clichÃ©s, he seems incapable of producing anything else.

A scene with Jed looking at faded papers concludes with “things and beings have a life span,” and a Christmas dinner between Jed and his father ends on “human relations, after all, are a very small thing.”

In The Map and The Territory, we are given such stock figures as the lonely artist driven by an imperative above himself, the ambitious but passionate Russian, and the bitter, mal baisÃ© PR woman.

“What he is really interested in, is not sex, but the organization of production,” says Houellebecq of the 19th-century French philosopher Charles Fourier. Replacing “sex” with “human relations,” we can say the same of Houellebecq.

“Yes, it’s true,” his eponymous fictional character almost admits, “even if my real subject had been the industrial process, without characters I couldn”t do anything.”

So he pulls a few types out of a sociology handbook as an ambitious and misguided misanthrope picks people like pebbles to strew along his path. He cobbles together a story as a package.

“I think I’ve more or less finished with the world as narration,” says the fictional Michel Houellebecq, “the world of novels and films, the world of music as well. I’m now only interested in the world as juxtaposition”that of poetry and painting.”

Unlike Houellebecq, Sherman has an endless supply of characters, since she is creating them stroke by stroke rather than picking them ready-made off the rack; and since she didn’t feel compelled to go through the motions of a story, she made stills that she shows untitled.

Jed Martin titled his first solo show The map is more important than the territory. If life is the territory, then the novel is its map. Houellebecq’s books are novels just like a dot on a map is Paris.