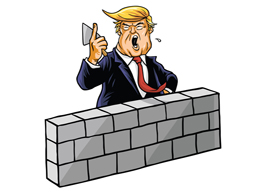 • A 2004 bus massacre in Honduras in which armed MS-13 members hijacked a bus and wantonly sprayed lead on the passengers, killing 28 and wounding 14—most of them women and children.

• A series of 2016 slayings on Long Island, including the mutilation murders of two teenage girls who were walking home. Video footage of their hacked-up bodies was sent to one of the victim’s friends.

• The 2014 murder in a DC public park of an MS-13 member who was stabbed, hacked to pieces, and decapitated by fellow gang members because he owed them $600.

• A 2017 murder in Virginia in which three MS-13 members allegedly stabbed a teenager 16 times, ran over him with a car, and hacked off his hands.

• The 2013 attack on a Houston teen in which he was beaten with baseball bats and hacked to death with a machete. Photos of the victim’s dismembered body were sent as “proof of death” to two people in Virginia.

• The 2017 killing of a 15-year-old Virginia girl who had a tattoo cut off her hand before being fatally stabbed in the chest and neck.

• A 2011 murder in New Jersey  in which the victim was clobbered in the skull with a baseball bat, had his throat slit with a knife, and was stabbed in the back 17 times with a screwdriver.

When Bill Clinton’s tough-on-crime policies sent thousands of MS-13 members back to El Salvador in the 1990s, they ironically were able to plant deep roots in their homeland…and throughout Central America…and then globally. MS-13 membership is estimated to be anywhere from 30,000 to 50,000 worldwide, reaching such far-flung places as Egypt, Australia, France, Canada, Korea, and Peru. Their US membership alone hovers around 10,000, with MS-13 activity being reported in 46 states. Although they’ve yet to sink their claws into the large-scale global drug trade on the level of the Mexican cartels, they dabble in contract murder, human trafficking, street dealing, child prostitution, and similar iniquities.

And now that Donald Trump wants to purge them from the USA just like Bill Clinton did twenty years ago—although Clinton wasn’t called Hitler for doing it—he’s being called a monster.

In this fight, I’ll take the monster over the animals.